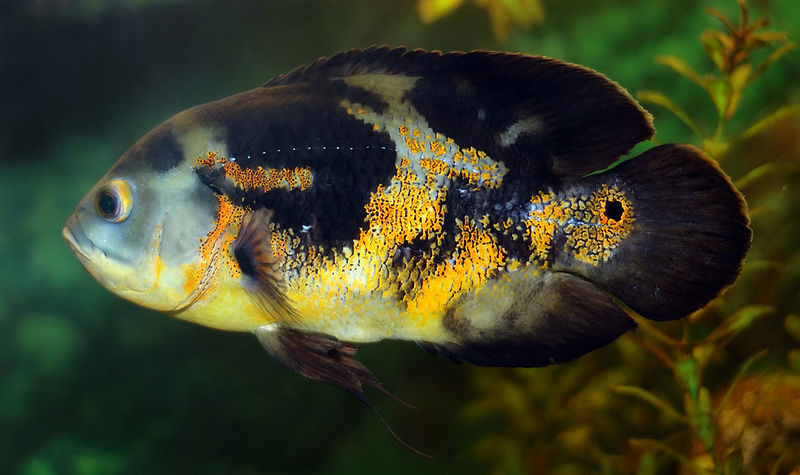 Many people think that fish do not sleep because their eyes are always open. The thing is that there is no fish in the world that has the ability to close its eyes. Sleep in this species of animal is not about closed eyes but about rest. Mammals lie down on the floor and close their eyes while sleeping. However, fish do not behave that way. Rather, they go into a kind of relaxation that helps them regain their energy.

If it’s not a cause for alarm, why is do my Oscar fish sleep on its side?

Oscars, like a lot of cichlids, lie on their side when they enter a sleeping state. Sometimes, resting without even sleeping is out of their need. However, there are other reasons such as an Oscar fish sleep at the bottom of the aquarium and on its side

Oscars are very social animals. There is an inevitable hierarchical position between them, they are known for their territorial behaviour. If you keep more than one oscar fish in the same aquarium, there is bound to be a conflict.

Another quite unexpected thing that can leave Oscar fish behind and hide at the bottom of the tank is human interaction. Oscars are very sensitive animals and it only makes sense that they are afraid of their home being invaded by human hands.

The hoses and pipes certainly add to the feeling that the fish holds. No one would be comfortable having huge hoses and accessories in their home.

No, the truth is that there are some Oscars who are docile. Although there are Oscars with many personalities. They can even inflict a nasty bite on your intruded hand if you put it in your tank.

That’s not to say that some Oscars are strictly aggressive or strictly submissive. Oscar’s behavior can change from mood to mood or from Oscar to Oscar. It may also be affected by the presence or lack of or any other fish. Maybe that’s the reason the oscar is very popular in the fish tank.

To be more detailed on how Oscars sleep and behave in their resting state, I would like to reiterate that Oscar fish are more rested than actual full sleep. Oscar fish are nocturnal animals and thus you may notice this behavior only at night. It will return to the corners and hide behind rocks in the aquarium. They will try to hide behind or under them while it takes him some time to get comfortable.

This behavior is very common among cichlids, you can see if your Oscar will respond by lightly touching the tank. In the wild, Oscar finds somewhere to hide at night. This can be under rocks or between tree roots. They do this because they are trying to avoid being eaten by some bigger fish.

Are there other chances for Oscar lying down?

If you consider the fact that fish are constantly forced to swim, it is no wonder that they sometimes lean to one side and become motionless. If you keep the aquarium lights off all the time, you can see Oscar sleeping during the day. This is because it needs darkness to tell the fish that it is time to rest. However, if you keep the lights on, they will miss their natural sleep hours and end up weak and sleepy during the day.

There can be many reasons for not sleeping. Lack of sleep can make Oscar tired and restless, or even fall ill and die. This is why it is important to know the risk factors of this condition and face it boldly.

This is because catfish can disturb Oscars at night and they also make a lot of noise. Catfish can also grow significantly bigger than the Oscars. This means that Oscar could become a prey to the catfish. At least, they will disturb Oscar’s sleep. On the other hand, things could get pretty bad for the catfish to kill the oscarfish.

For some strange reason, plecs are attracted to Oscar’s shilling shimmering body. Plecs have a thing for sucking on on the flesh of the Oscars while they sleep. So if you keep your Oscar and Plec in the same tank, you have to be mindful and alert of the Oscar. If they develop holes in their sides, you may have to remove the plec.

This is a condition where the fish feel cramped in the tank due to lack of enough space to swim. This can be especially bad if you have more than one fish in the tank and they have to fight for space or territory. If the tank is too small, it can affect your fish’s behavior while sleeping. This can also cause the fish to attack each other because they will constantly be in each other’s path.

How to change the tank water without interrupting the oscar

I do have some suggestions that could help, however there is no guarantee of a change in the behaviour of the oscar, but it could be worth a try. First create a hiding place for your oscar before changing the water. I know the Oscar may be very large and that your pet store may not have a castle to purchase for its hiding.

Do not be troubled because there is a way out; simply replace the castle with terracotta flower pots. Another option would be to reduce your attack in the tank.

Try switching to the method of siphon. You really will be glad you tried any of these methods here because it really is not an easy task to go bucket after bucket of heavy water trying to put water in the drain; it is not a very healthy practice.

What happens if something eventually goes wrong?

A lot of mid-water and free swimming fish lying at the bottom of the aquarium is an indication of something bad. On a scale of ten, you can bet on seven that the fish at the bottom may actually be at the verge of death. This leaves us at cross roads, between avoiding any form of interruption, and being sure that the fish is alive; how do you know your oscar is sick, or if it’s sad, or if it wants some time to itself? It really is not very easy to dictate but there is a way out.

If the oscar acts only when you are in contact with the tank and reclines to itself afterwards, then you have no need to worry. Should the oscar be lying on its side without showing secondary signs of illness, there is probably nothing to worry about.

On the other hand, if the oscar spends time in excess at the bottom of the aquarium especially sleeping on its side, this could in reality be an issue that requires an urgent and keen attention, hence there is need to examine the oscar and check for other signs. Here is what you should look out for: Does the fish have any hole on its head? If the fish has holes, especially small holes on its head or even large holes, then it is a sign of HITH, and that is an infection from bacteria.

Also, look out for flukes on the gills, or long strong bits of poop in the tank, cloudy eyes, and patches that are white and fuzzy. Any of these indicates infection from fungi and parasites.

There are other signs that your fish is sleeping laterally;

Fish do get constipated! It can be caused by an improper diet, certain manufactured fish foods, or overeating. Constipation can cause blockage if not resolved.

Fortunately, you have two options for treating constipation in fish, but the first step is the same.

Then use one or both of the following methods to clear the blockage:

Tank cycling is essential if you want the oscar to inhabit a peaceful environment.

Grown bacteria however digests from the waste by changing it to nitrites. Even though the water is more toxic when there are nitrites in them, than when there is ammonia in water because the nitrite could lead to a higher PH level.

Good thing the bacteria often changes the nitrite to nitrate which is not harmful to the fishes. Should the water not be changed as often as it should be, the nitrates could accumulate and be toxic. This will result in stress and an appetite loss for the fish.

More so, there will be an increase in the growth of algae hence, it is important to follow the process of cycling to maintain a healthy tank for the fish.

Water change produces water that is in rich in fresh mineral for the tank. By doing partial water change of about 15 – 20%, you also bring down the quantity of nitrates that grow in the body. Changing of water weekly eliminates pollutants and toxins that could have accumulated in the aquarium.

A siphon and a gravel cleaner can be used to clean up the gravel, while the waste from plants and fishes can be taken away to reduce the level of ammonia and keep the water clean. It is necessary to know that during the change of water, ensure that not more than one-third of the entire volume of water, there should be no chlorine in the water, and the water added should have the right temperature and PH.

Proper water current plays an important role in the health management of aquarium fish. Many overlooked processes important to fish health occur because water actively moves throughout the aquarium.

Call the vet if you notice that your oscar fish sleep on its side and not swimming for a long time. It can be a sign of some disease. Although, it is normal for Oscar fish to sleep on its side. Oscars are usually awake during the day and sleep at night. If your Oscar is sleeping all day, call the vet.