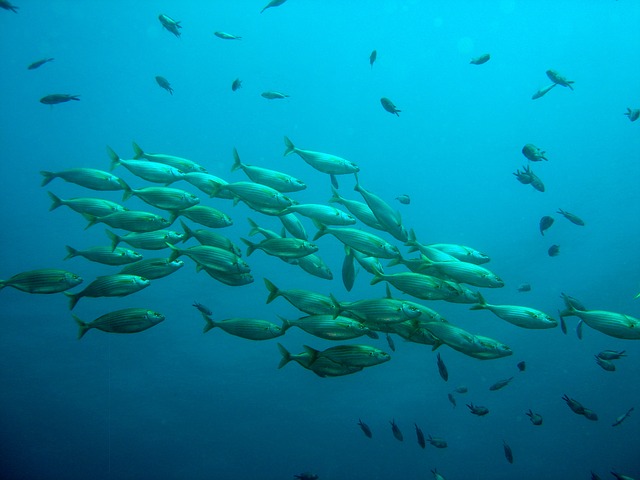 There is a spectacular view seeing a big school fish that moves in unison as though it is a single creature, you may ponder about who is in control, who gives the orders? How close they stay? Why they seem to be selected differently? Here are details of what you need to know before introducing a school fish to your tank.

Association is regular among various species of fishes, and it is estimated to about eighty percent of species of fishes live closely for a while. Fry and eggs often are known for the time they spend in the schools, they spend a lot of time when compared to the large species that can feed themselves.

This is because the fish moving is not really as easy as just meeting a colony and swimming with them. They swim so close that one may be confused about how they possibly fit into each other. It is necessary to know that they have a leader.

Let us know the difference between Schooling vs shoaling

The word school means the act of a group of fish swiming in the same way in an orderly fashion. Meanwhile, shoaling is the first meeting of the colony for association or better put for schooling. Again, the fishes school elsewhere and become shaol when they are no longer feeding. Shoalers only meet sometimes to either feed or breed.

How does school live together? A variety of senses are employed to keep the schools together, while vision is important , and the use of pheromones all help fish to what the school is doing and well, they are in the school. Predator avoidance Schools are made up of thousands or hundreds of similar fish that confuse creatures and make it difficult to extract and attack a single fish.

An extreme but common response of schools attacked by creatures is the construction of a circle. These behaviors are unique and very common among many species of living things and nature. it becomes difficult for predators to select one prey from groups because many moving targets create an overload of the visual’s channel of the predator.

Feeding It makes it easier for some fish to find food. With a lot of vigilant eyes, the school can find potential victims. The school is not controlled by a single fish. It only appears if there are enough members who follow a set of relevant rules.

The idea and the act of schooling equally improves the fish’s ability to get a mate and reproduce. A lot of fishes congregate in schools where they need to mate, but also could be the other side. Some schools could be only females. All of them protecting themselves from male harassment. More so, the eggs fertilize more in a colony as it should instead of having fishes feed. 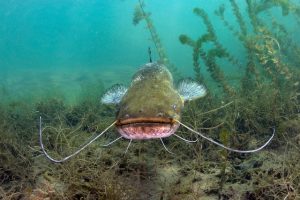 Cories are active little catfish that roam around your tank, cleaning the uneaten food that falls on the substrate. About 1-3 inches in size and fun to watch. You can think of them as part of your aquarium sanitation staff.

But some people don’t realize that cories need to stay in school. Keeping cory fish in groups helps to manage their stress levels. When they are close to others like them, they are happy and healthy.

Make sure you throw a few sinking pellets in the tank during their feeding so that your cories have enough food. 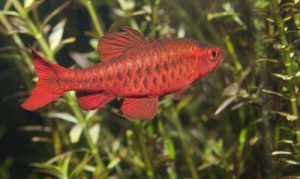 They are usually peaceful and make amazing additions to the aquarium. Males are bright red in color while females are subdued.

Also, you will not usually find them hanging in a tight group like the neon ones do, but it is still important to have enough of them to avoid stress. It is also a good idea to put two females to one male, to avoid the female being stressed. 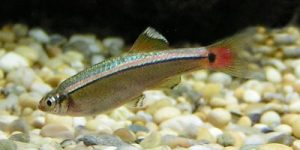 White cloud minnows are cold-water fish. When tropical fish thrive in temperatures between 75 and 80 degrees Fahrenheit, the minnows prefer a temperature of about ten degrees cooler.

It’s always best to keep them in a tank of their own or with other fish that can tolerate cold temperatures such as cories, guppies, and zebra danios. You always want to do some research before you bring the fish home, but that’s especially true with white minnows of clouds. 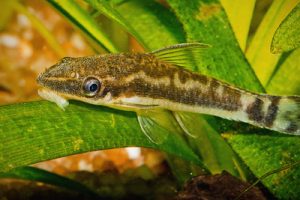 Many new aquarium owners are looking for algae-eating fish to help keep the area spiffy. They are looking at Plecostomus, a suckerfish that always clings to the side of the tank. The only problem is that the adult pleco can reach the size of two feet and is not suitable for most aquariums.

Instead, many owners of fresh aquarium water could be better off with an otocinclus catfish school. Otos look like small plecos and will cling to glass in the same way. Its best to house them in groups and avoid keeping them together with large fish that could eat them. Make sure you feed algae wafers so you know your otos are getting enough food. 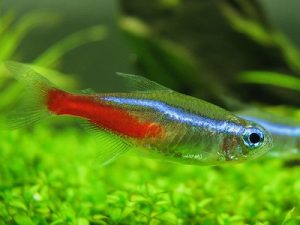 “Neon Tetra” by michelle.khuu is licensed under CC BY-NC 2.0

Neon is among the most colorful freshwater fish in your aquarium. They are small – about an inch long as adults – so do not include them with large fish that may see them as a snack. They do better when they are in groups than alone. 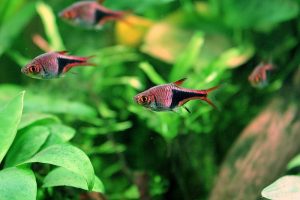 Harlequin rasboras are peaceful and grows to a few inches in height. They have a reddish-orange color on their sides, aligned with their black markings on their tails. These fish usually survive amidst the colony of six and the big schools are appreciated.

These types can be adapted to which fosters it as a better choice for its starters. As with the other small fish, avoid including them with large tank partners that can be viewed as lunch. Alternatively, the harlequin rasbora is a colorful and easy fish to keep in your tank. 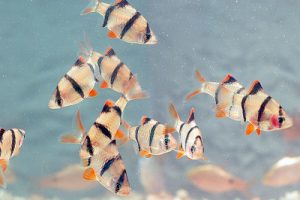 “Tiger Barb” by cb_agulto is licensed under CC BY-NC-ND 2.0

Tiger barbs are attractive fish with striking black stripes. They are aggressive and they have a reputation for being the last bullies.

You can put them in a group of six or more to help keep them calm, but they can still be kept with other semi-aggressive fish. Avoid keeping them with fish that have flowing long fins. 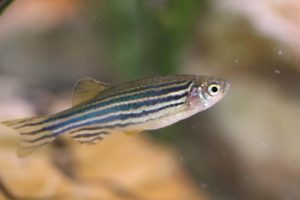 “zebra danio (stripe)” by bob_jenkins is licensed under CC BY 2.0

They are small, peaceful fish and are best kept in a peaceful community tank and other peaceful fish that are not big enough to eat them. Remember: Big fish eat small fish, so whenever you put in a small fish like Zebra Danio you should be careful. 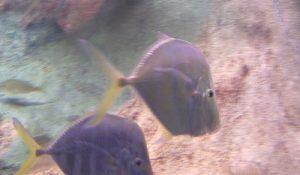 This is one of the coolest fish out there, but not for everyone. Hatchet fish is peaceful and lives in the upper part of the water column. However, they are easily alarmed and use an interesting strategy to escape predators. Jump out of the water!

In the wild, the jumping hatchet fish will return to the river. In a home aquarium, it may jump out of your tank. It is very important that you make sure that your entire aquarium is tightly covered if you intend to keep them. 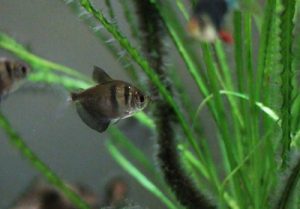 “Black Skirt Tetra” by Ken_Lord is licensed under CC BY-NC-SA 2.0

Bigger than neon and a better choice if you have big fish in your tank. Their slender bodies with black stripes and flowing black fins make them look like sharp fish. Keep them in groups of six or more and give them at least a 15 gallon tank. Like most tetras, they will enjoy an aquarium with many medium and long vegetation.

The fish shared above will definitely be healthier, happier, colorful, and less stressed; they will be more colourful when they are in bigger numbers, colonies, or groups.

You can build a small school in your aquarium, and be filled with relaxation and entertainment that the species of school fishes will be much smaller, less prone to hiding in the shadows and can enhance the look and function of your entire tank and everything that goes together, is worth it!