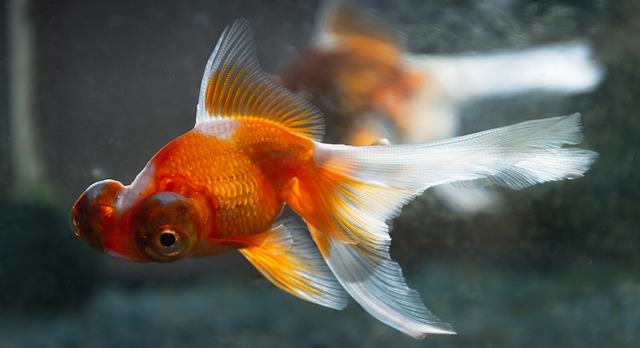 When I heard about the goldfish, I really loved the sound of the name, and I was hoping that the goldfish spews gold, breathes gold, and even lays golden eggs. I also wonder if the fish was bred with a bunch of gold in a corner of the water. You should know by now that my imaginations are always wild and are often very hilarious, so you can laugh about them as well go wild with your imaginations or be as hilarious as you deem fit.

The goldfish whose nomenclature is Carassius auratus,  is a freshwater fish that belongs to the family of Cyprinidae in the order of Cypriniformes. The goldfish is a species of fish that is commonly, or is mostly kept indoors as a pet in an indoor aquarium. It is also one of the most common fishes introduced to aquariums or aquatic tanks and aqua spaces. The goldfish is mostly found in East Asia. More so, the goldfish is relatively a very small member in the carp family.  (The carp family includes the following: the Prussian carp,  and also the crucian carp).

It is important to note that the goldfish was first bred selectively for the purpose of color in the ancient land of China, over one thousand years ago (1,000). That single development, led to the multiple breeds of the goldfish in the aqua space and generally among aquarists.

The Goldfish usually breeds fishes that are usually very different in their sizes, in the shapes of their bodies, in the configuration of their fins, and in their coloration. They have different colour combinations that include the white, the yellow, the orange, the red, the brown, and the black colours.

The goldfish is best described based on its types.

Generally, some goldfish are known for growing up to two feets long and are also known to weigh about ten pounds. Aquarists say it is usually the less common goldfish.  It is also important to know that this size is usually common in rare goldfish in the wild or natural habitat, so if you have your goldfish in a fishbowl, then you should not expect that your goldfish will grow like those in the wild, or to grow past a few inches.

Here are a few types of goldfish (remember that the goldfish will be described with a few of them).

The Comet species or type of goldfish usually has a body that is a bit shorter, the body is also leaner than the regular breed of the goldfish. More so, the comet goldfish has quite distinctive wide spread long tails decorated with very sharp points. The comet goldfish also needs a little more room than the regular goldfish so that it  does not  injure its tails on the substrates of the regular goldfish, or from the decor. This species of goldfish is very active and attractive, and is also one of the major breeds of goldfish

The nymph species of goldfish used to be very popular among aquarists and fish farmers some  years ago, about fifteen years ago. However, in the society of aquarists or in the field of fish farmers today, there is a decline in the request for gold fishes. They treat it almost like it does not exist, or perhaps like it is old fashioned and should be in a museum or just go extinct.

Nymphs are in fact or rather in reality the exact opposite of its name. This is because following the name “nymph” it is expected that the fish should be small in size. On the contrary, the fish is sizable enough; without mincing words, I can say that the nymph species of goldfish can in reality grow up to twelve inches in length.

More so, it is important to note that the nymph species of the goldfish are very easy to be maintained in a pond, aquatic tank, or even a large aquarium.

There are over twenty breeds of the species of goldfish, but these two best describes the goldfish.

Does the Gold fish Sleep?

We have arrived at the main topic in this article which is “does the Gold fish sleep?” Already, from the description of the different species of the gold fish, you now know that the Gold fish has no eyelids, which implies that it does not close its eyes, nor does it seem to sleep.

However, this is supposed to be a yes or a no question right from the introductory part, but for some reasons I want you to keep speculating and thinking about the sleep of the gold fish, whether it happens or not. Trust me, that puzzle is all the company you need to enjoy this article.

So the succeeding chapters will be pointers or premises from which we will ascertain whether or not the different species of gold fish sleep.

What Does the Gold fish Look Like When They Sleep?

It is important to know that the gold fish does not lie down to sleep, just like humans or some other animals do. If the species of gold fish are set to sleep, they gradually start to become passive, and less active. One minute they are on a spot, just there in one place, and the next minute, they move about slowly, almost non-locomotive do that they are able to keep themselves and also stay stable while sleeping.

Now because of their tactics, the species of gold fish usually appear to be hovering in the aquatic tank or the aqua space. Also they stay low in the tank or rather in the water, almost an inch or two inches off the bottom, while their heads slightly point towards the bottom of the tank downward.

The  act of changing colour is an adaptive measure implored by the species of gold fish to ensure their safety by hiding themselves from their predators while  they are asleep; it is more or less a camouflage.

When Does the Gold fish Sleep?

It is said that nightfall is a time of rest, but for the gold fish, it is a different thing altogether because the gold fish does not naturally sleep at night time like most creatures do, especially nocturnals.

Usually, different species of fish sleep in the night, but are mostly awakened or startled by noise. So, the best thing to do is to keep the noise down whenever the fish wants to sleep.

However, the gold fish sleeps better in the dark, and in the quiet. This is a bit confusing because the night is dark, and so a fish given to sleeping in the dark should be able to sleep at night. This is proof that the gold fish is not necessarily a fish in the wild, because it is otherwise difficult to account for its sleep.

By practice, if you really want the species of the gold fish to sleep, then you will have to turn off the light, maintain maximum silence, and the gold fish will gradually sleep.

What Happens When The Gold fish fails to Get Enough Sleep?

With a subtopic like the one in this section, I bet you will scream a yes to yourself, and also congratulate yourself for knowing the answer to the question. Anyways, you may need to take a chill, press the break button, relax and see what the actual content is before you conclude on the response and congratulate yourself.

One is certain, and it is that just like human beings, and most living things, especially the locomotive moving things, fishes need to sleep in order to gain strength and equally restore enough energy to the  body system,  as well as to also maintain a proper immune function against dangers and even diseases. If for nothing, it has been proven that if fishes like other living organisms do not get enough sleep, or do not sleep properly, they often lose the ability to strongly fight infections off the body and this also affects the rate at which their  metabolism works.

How Can You Distinguish a Sleeping Fish From a Sick One?

By now, you should already know that the goldfish, regardless of its species, sleeps.

So in this section, we will briefly help you differentiate a sleeping fish from a sick fish. The goldfish remains stationary yet upright if you remember the description of the body of the different species of the goldfish. The goldfish does not turn upside down nor do they turn sideways.

A goldfish that is leaning, or that is upside down, or a goldfish that is lying on the bottom of the fishbowl is definitely not sleeping, instead the fish is likely very sick. It is necessary that you know this, for instance a goldfish with disease of the swim bladder (that is, the organ in the body of the fish that keeps the goldfish quite buoyant) will usually float by the side, that is sideways or even float upside down because  the ailment often results in the goldfish having difficulties swimming.

On the other hand, if you see your gold fish hovering or floating above the aquatic tank base or  floor, looking somewhat pale, kindly turn off the light of the fishbowl or aquatic tank, turn the noise down to enable the species of the gold fish sleep, because after the nap, the gold fish will wake up healthier, more excited, and more energetic.

The species of the goldfish are very interesting to read about, and to even practice or introduce to your aquarium or your aquatic tank especially with its bulgy eyes that could freak other tank mates out. If you are a lover of adventure, feel free to crossbreed different species of goldfish for more outstanding breeds.