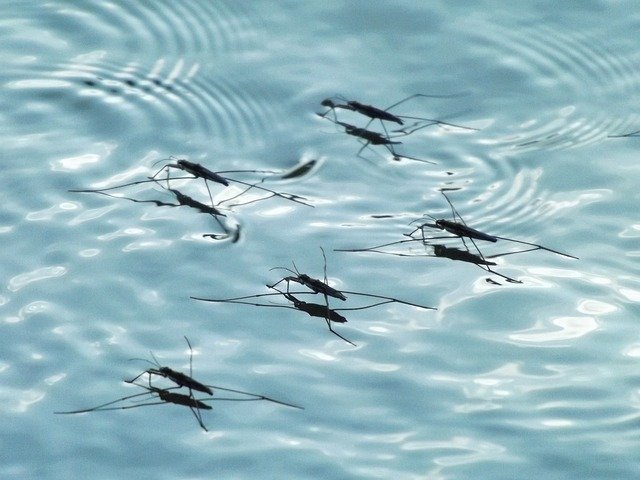 Fish tank can be a very interesting addition to your home but they can be the ideal habitat for mosquitoes to to lay eggs. So, a big question from our commonly asked is how do you get rid of mosquito larvae in fish tank?

What are mosquito larvae?

When mosquito eggs breed and hatch they become larvae. The larvae live in water for about fourteen days, but it depends on the temperature of the water

Mosquito larvae require a large amount of food and energy to mature. They feed on algae, fungi, plankton and any small thing that comes towards their mouth to develop all the energy they need. Other mosquitoes such as Toxorhynchites are by far the largest mosquitoes and share their habitat with the larvae of other mosquitoes. Furthermore, they shed their skin several times until it becomes a pupa which develops into a flying mosquito in 2-3 days.

What do mosquito larvae eat?

The larvae of mosquitoes have bodies that are in the form of tubes, the larvae survives by feeding on the bacteria that grows in water that is stagnant. The larvae also feed on the algae and on the fungi that grow in ponds and lakes without any form of aeration.

Males typically survive for ten days while the females survive for about fifty-six days. The initial three stages of the life of a mosquito are within water, till the last stage which is the stage of adulthood when the mosquitoes are able fly. Which are about four stages of life:

There are certain types of fish that feed on mosquito larvae. It helps in controlling mosquito larvae to fully develop into an adult mosquito. Fish such as mosquito fish, guppies, tilapia, minnow, goldfish and koi carp with also many others are known for their larval feeding abilities.

It also depends on how big your fish tank is and also the temperature. Some fish like koi carp may not eat many larvae, so researching and mixing it with other fish can help you avoid larvae in the fish tank.

It is natural that mosquitoes come to lay eggs, especially in aquariums with stagnant water. Most of the fish that we keep in fish tanks feed on larvae that prevent them from developing into their final form.

Therefore, there is nothing to worry about when mosquitoes come and lay eggs in your aquarium. It is also a great source of live food for fish and is completely safe as long as they keep eating the larvae.

How long do mosquito larvae live in fish tank

From the day the female mosquito arrives in the fish tank to lay eggs, the process is gradual as it first seeks stable if not freshwater. Most eggs hatch within 48 hours, which later develop into mosquito larvae.

The larvae then stay in the water and often come to the surface to take oxygen and develop into pupae in about 5 days. When they develop into pupa, it only takes a few more days for them to become a full-fledged mosquito. Therefore, for about a week in total, they then seek water in search of food until they are sufficiently mature.

How to Control Mosquito Larvae in fish tank?

As much as they do not cause any major trouble to fish and aquariums, some people are concerned about the damage it may do to the fish. Since not all fish eat the larvae, some people want to get rid of them or keep them under control. To avoid turning them into a mosquito that is willing to suck your blood, following these steps may be considered.

2. Get fish that will eat them

The natural way to get rid of mosquito larvae in fish tank is to have some fish that eat them. Fish like mosquito fish, goldfish, guppies are known to eat the larvae. So, as long as you keep them in the tank, they will work for you. This is one of the best ways to control mosquito larvae in fish tank. But be sure to check the water temperature before adding fish as not every fish can adapt to the same temperature.

Note: If you intend to keep only guppies to eat the larvae, I suggest taking just one to avoid any conflicts. Also take male guppies so that you don’t have to deal with pregnancy issues. Female guppies carry a lot of eggs!

Judging by its name, this organisms feeds on the larvae of mosquitoes.  They don’t occupy too many spaces and they are suitable for just any parameter and body of water. They are small in size and require a lot of space so that they can hide from natural predators.

This species are somewhat related to the mosquito fish and they equally feed on the larvae of fishes.  They have more alluring colours that makes them suitable to be ornaments in ponds. This species do not exceed 2 inches in length and they swim very fast, which makes them key predators of the mosquito larvae. Because they are species of tropical fishes, they avoid atmosphere with temperatures that are below fifty-four degrees. They are called a rainbow fish or a rainbow fish because they are widely distributed.

You can also prevent mosquitoes from entering the aquarium by simply adding a tank top net. If you do this they may not reach the surface of the water to lay eggs, preventing larvae from hatching.

If you see that the larvae look more like tadpoles, they are already at maturity stage. I would suggest just taking them out with a trap and flushing them down the toilet at this point.

Filters and pumps in a fish tank can help with water aeration and movement of water to prevent the stagnant water as well as well as still water.

To prevent them from growing into an adult mosquito we can reduce the vegetation which are the plants that we keep in our fish tanks.

By doing this the larvae cannot eat any food and will eventually die. By cleaning up algae and food supplies that feed you larvae, you can prevent them as well as keep your fish tank aesthetically pleasing.

If there is an uncontrolled number of larvae that requires large action, chemicals may be used to prevent them from growing in numbers. Pyriproxyfen and methoprene are chemicals that can be used to inhibit insect growth hormone.

In addition, these chemicals prevent mosquito larvae from developing into adults. These chemicals definitely disturb the aqua ecosystem so make sure to take necessary steps while following this process.

8. Deal with the mosquito population around your property

Your pond may be a major breeding ground for mosquitoes, but chances are they have found homes in other areas around your property as well. Eliminate standing water when possible.

When mosquito larvae hatch, they need a food source to fuel their growth. Try using a pond algaecide to get rid of organic matter.

Most fish tank owners prefer their tanks to be topless. Easy to maintain but it invites mosquitoes. The best solution is to install a screen top that covers the top of your fish tank. Finding a right dimension will be the challenge. You can try the local reptile pet store or try to DIY. The screen top can be made of netting material so it is quite easy to find.

The use of baking soda for larvae is not an effective method. It can only be used to disinfect fish tanks and may not solve the problem completely.

Mosquitoes are also so small then imagine how small their eggs can be. So except you get a magnifying glass you cant actually see them.

You can prevent this from happening by not allowing any stagnant water, or by using a net over the fish tank.

Let us know what you think! don’t hesitate to let us know if there are any mosquito repellants that we forgot to mention.