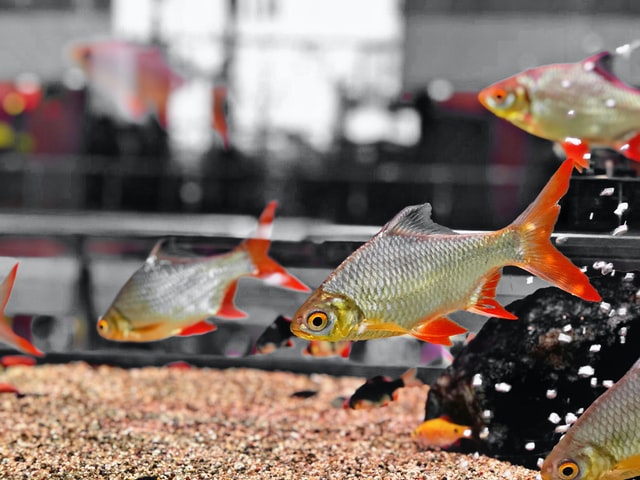 What is cycling your fish tank?

When we talk about how to cycle a fish tank, we are talking about the nitrogen cycle. This is a natural process that helps to separate toxic waste into something less harmful for your fish.

When you set up a fish tank for your new pet fishes, you will need to create this cycle in their new aquarium. Basically every fish keeper must learn how to cycle a fish tank.

The cycle allows good bacteria to grow in the tank, acting as a natural filter for any contaminants produced by your fish. Their wee and poo have high levels of ammonia which is deadly, the cycling helps convers nitrites into a non-toxic nitrates.

What happens during the cycle?

There are three major stages that occur during the nitrogen cycle:

Ammonia is introduced into the water through waste and raw foods. This is toxic to your fish. Ammonia may be present if the pH levels in your tank water are above 7.

Bacteria begin to form and convert ammonia into nitrites. These are still toxic, but are an important phase in the cycle. You will be able to tell when this happens when the pH levels start to drop below 7 and when the water looks cloudy.

Nitrites form and are converted into nitrates by new bacteria. Nitrates are the end goal of a cycle that filters the wastes in your water. They are not harmful to your fish except in large quantities, so you will need to regularly inspect the water to make sure its levels remain below 20ppm.

How long does it take?

Creating a healthy nitrogen cycle in your new aquarium has no time limit. Usually, however, it will take a few weeks to provide regular water change and carefully check for toxic water. Your pH, ammonia and nitrite in your aquarium water are all good indicators.

What products are needed in cycling the aquarium?

How to cycle a fish tank without fish

Have you cycled a fish tank before?  We have put together a simple step by step guide.

Step 1. Set up your fish tank

You will have to get all the equipment needed in an aquarium. This includes plants, air pump, filter, heater, and substrates see also how to set up a fish tank

Useful bacteria need a place to hold on, they will often prefer the filter and the substrate, as soon as the aquarium is ready, keep the electrical appliance turned on throughout the process of cycling, such as heaters and filters. This accelerates the speed of the cycle of your tank and helps bacteria that is beneficial to grow.

See also how to set up a fish tank

This step is usually omitted in the cycling of the tank and often leads the failure of the entire cycling process. The cycling can come to an end or to a halt when the PH level drops to seven degrees or below.  It is always advisable to check your pH, once it is below seven, you can proceed.

The bacteria that is beneficial to the tank usually release acidic elements that lower the level of the PH. Change the water by twenty percent to maintain stability. Therefore, be sure to check your pH regularly and adjust it if necessary.

Since it is a new tank, there will be breaking of waste down to ammonia because there will be no waste, kindly observe the quantity of your water, and put ammonia in the right quantity.

So, measure your ammonia…

Less than 40 liters of fish tanks: Strive for about two ppm. For tanks that are above forty liters, strive for about four ppm, and add the right quantity of ammonia. To know the right quantity, use the test kit for the aquarium, the test kit will then provide you with the exact result of the ammonia by ppm. This should be done after the ammonia you added have stayed for about one hour and is well distributed in the water.

Always make sure to observe the level of the ammonia daily with the right test kit, then wait for the ammonia to drop, this deserves to be done weekly, at the end of the week, you progress to the next step.

At the end of one week, the next thing to be done is to test for nitrites. If the test is positive, then the cycle has begun. Remember that the bacteria feeds on ammonia, the only activity that promotes the growth of ammonia is the one done by you.  Therefore, we will have to give the bacteria some food.

To feed the bacteria is not rocket science, we will only need to add half of the quantity of ammonia that was introduced on the first day. However, make sure that the level is below five ppm, then you begin to monitor the level of the nitrites daily. The level of the nitrites are expected to rise constantly for a while before it begins to decrease. Once the level of nitrites starts to reduce, then the fourth step is complete and you can progress to the next step.

The next thing to do is to ensure that there is enough food for the bacteria to eat, so to realize that, it becomes necessary that more food is added by adding more ammonia. If possible, keep the level of ammonia above one ppm and when the ammonia level and the nitrite level read zero, know that the cycle of nitrogen is complete.

Also, do not simply add a load of fish. You need to do this slowly, do not introduce a lot of fishes all at once, and then wait for about one week or two weeks before adding more fishes to the aquarium.

You also need to make plans to properly clean any substrate with a hose or the siphon before the introduction of the fish. After this, the cycle is complete. If you have a record of the entire process, you will learn how the nitrogen cycle works and the essence of the processes

Cycling an aquarium with fish:

This method is the most common, used by both beginners even though, this method is not the best method because in this method, the species of fishes are exposed to nitrites and ammonia, and it will be very harmful to the fish that fishes may not survive the process

However, some species may be able to survive this more than the other species. Also, if you make the mistake of purchasing the fish and the aquarium on the same day, this cycling method is best for you.

Add between one to two fishes to each ten liters of water to avoid any error, because adding a lot of fishes could lead overcrowding and waste because this can lead to a spike of ammonia that can destroy the fish

Feed the species of fish with moderate-sized meals, take caution to not overfeed the fish, instead follow the usual once in two days feeding thumb. If you overfeed your fish, there may be leftovers, this can decay and increase the amount of toxin within your tank.

The fish is exposed to excess nitrate and too many ammonia that is very deadly, which will lead to the necessary changes of water. This changes will ensure the level of toxicity does not increase beyond necessary. It is important to make arrangements to change between ten to twenty-five percent of the water for about two to three days because any changes beyond this will be risking removing ammonia and nitrite that is required for the beneficial bacteria to feed on.

4 – Test of the Toxin levels

The testing of nitrates should be available. As we discussed, at first, there will be no atom of nitrites in the tank and after some days, it rises. The process of testing is vital because you have to know the levels when they go down to zero, showing that the process of cycling is over. Also conduct a daily test as it is necessary.

What happens if the aquarium is not cycled?

Well, the cycle is amazing because the cycle will eventually happen on its own. If the fish is in an aquarium that is not cycled, waste and food will release ammonia, which begins the cycling process.

This process will eventually put the species of fishes in too many problems that they will not be able to survive the process.

How important is it to cycle your fish tank?

In the wild, fish do not have the same problem of high toxicity in the sea as because of the abundant water around them. When fishes are being put in an aquarium, the enclosure may indicate that they are full of toxins if the tank is not properly cycled. It is very important to rotate your tank to keep your fish alive and healthy.

How to cycle a fish tank fast

Did you know that the cycle of nitrogen can be hastened and then you will not need to wait between six to eight weeks? Well, you now know and here is how to get it done.

Instead of setting up an empty tank with very small fishes, include live plants to aquarium then make deliberate effort to grow them with good fertilizers, substrate and lighting, plants also use the protein synthesis to monitor the level of ammonia.

As soon as algae and plants have new growths, know that cycle is completed, the plants also use the nitrate and the ammonia, then convert these elements to new roots and leaves. Then add some fishes and use the aquarium test kit to ensure that the nitrate is less than forty ppm and that the nitrites and the ammonia are on zero ppm.

It is important, the bad side of this can be that you can pass on some bad things from that

established tank which may contain harmful bacteria. So be careful, never to move things from the tank especially when the tank is contaminated by substances that are harmful.

What if I Still Have Problems?

If, after six to eight weeks of cycling, your levels of ammonia and nitrite are unsatisfactory, it may be due to these;

Knowing how to cycle a fish tank should be paramount, even though you have to be patient and put in some effort by getting the fishes ready for their new environment.