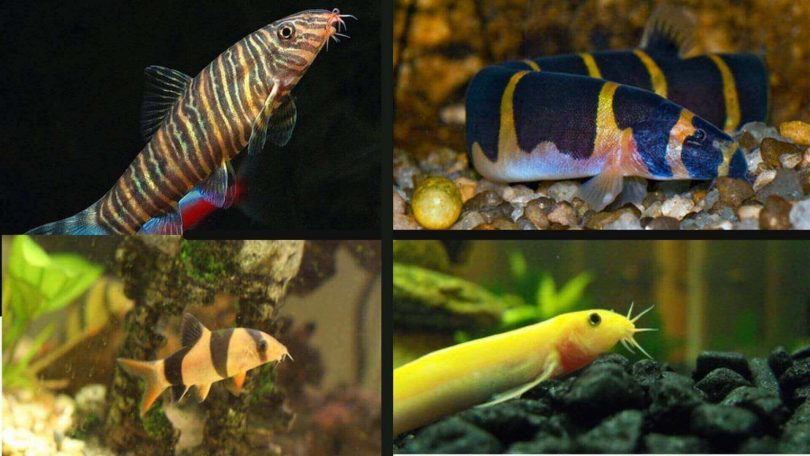 Loaches fish are a great addition to any tropical freshwater aquarium as they make the lower levels of your tank fun.

In general, they are fun fish and good scavengers who spend their time trying to find leftovers at the bottom of the tank. Although more commonly called true loach or loach, these fishes are usually identified as “Thorn eyes”.

This is usually because they have about one or two spines that are thorny between the eyes or under its eyes. So these spines stand and serve as protection, but you have to be careful while catching this fish, as the spines are caught in a habitat made of net.

The loaches are part of the cobitidae family, and only few species are made available for aquarists, because it has about one hundred species and so most of the attractive freshwater fishes belong to the loaches or the cobitidae family. Loaches are often found in Africa, Asia, and Europe, they are also made available round the ancient globe, like the southeast of Asia.

However, about three of these species are familiar to Germany, while there some species that are in the northern part of Africa, Ethiopia and Morocco precisely.

Physical forms of loaches fish are usually elongated and rounded not very large in size, only to an exception of few which are the botia reaching a size of 30 cm and the clown loach up to 50 cm.

Loaches can also be chunky and heavy in appearance and share some resemblance with worms and eels. It is important to know that this specie of fishes are bottom dwellers, although there are other species with intestines that are used by the species as organs for respiration like the organs of the corydoras. Organs like those of Corydoras.

This allows them to absorb oxygen from the direct surface, and is a factor which ensures the survival of the species whether or not the water is depleted or polluted. Also there are species of cobitidae that are known for their high sensitivity to the pressure of the change in climate that they can are active as they swim up and down the water.

This species is called the “weather” fish because it has been employed as barometers for living.

The Japanese fish called the dojo loach is an example of the weather fish. There is little or no certainty that displays like these are from barometric changes, other things in their various behaviours and circumstances.

They feed on dry flake food, supplements of dry and frozen protein like tubifex, they also feed on blood worms, soft algae wafers, algae and other kinds of plants while in an aquarium, but in the natural habitat, loaches feed on crustaceans, insect larvae, and live worms. The largest species of botia love the mystery snail as well as the Red Ramshorn nails.

They prefer to have hiding places that are easily accessible. Species that looks like worms often find it comfortable hiding beneath the root of woods or beneath plants, while the free swimming species like to stay hidden in caves.

All guides for fish have a full knowledge of the various species of loaches as well as the habitat, behaviour, origin, and even the required care guide under which the fish can be kept in an aquarium.

The Images of the various species of loaches are also provided in the guide to aid the aquarists in identification as well as choosing the species that could make good pets. 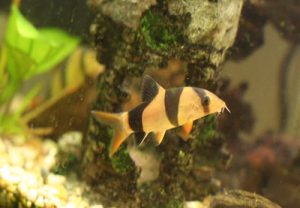 “Clown Loach” by rachelandrew is licensed under CC BY-NC 2.0

The clown loaches are usually the most identifies species of loaches because they are colourful and active and can grow larger over time. Large tanks of 55 liters or more are ideal for thriving schools. 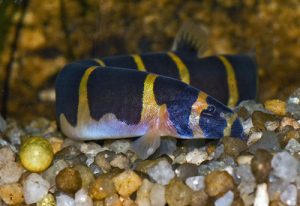 This species of loach has a horse shaped head.

Aquarists often do not see them for days as this species dive beneath the substrate in search of food and predators. One way to make sure you see this species of loach is to put off the lights by evening, then throw the food pills that can sink in the aquarium. Putting moonlight in a tank to make the horsehead visible. 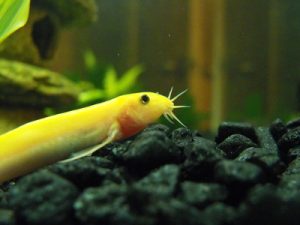 “Golden Dojo Loach” by Rhizae is licensed under CC BY 2.0

The species of weather loaches are best known for their sensitivity to the change that comes from the pressure from the barometer. This species are usually active and any change in the weather makes them more active. The weather loaches do not need any specific company, they get along well with other fishes. 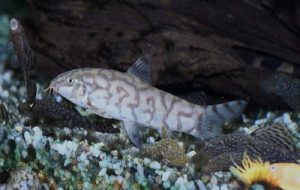 “Yoyo Loach” by Ken_Lord is licensed under CC BY-NC-SA 2.0

Like other loaches, they prefer to be kept in schools and may be uncomfortable or shy until they are comfortable with their place of environment. 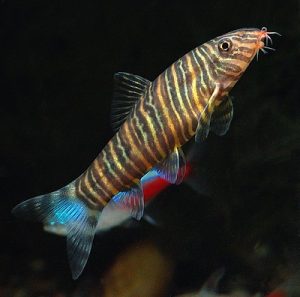 The zebra loach are mostly recognized through the different bands that are vertically across their fins. Species of zebra loaches are the smallest number of the loach family by size, and their calm nature makes them a good choice for aquariums.

Loaches are more vulnerable to disease than other aquarium fish. This may be accompanied by faint body scales and no head scales. So be careful when putting these fish in an existing tank. They are also very sensitive to the various medications used to treat many diseases; a separate isolated tank is required. Cold water changes and conditions can also put pressure on the fish, making them more susceptible to disease.

The most common disease affecting loaches fish is Ich which is also known as whit spot disease. It can attack almost all aquarium fish, but you will find that loaches fish are among the first to be attacked. Be very careful to treat ich as loaches are very sensitive to the drugs used to treat it. Often the dose is half of what is commonly used.

The second most common cause of loaches is skinny disease. This can be easily found. If your loaches are eating a high nitrous and healthy amount and still seem to be losing weight, it is a good chance they have the disease.

Outbreaks appear to be limited to just one or two. When keeping these types of fishes, it is common to catch deteriorating water conditions and diseases before other fish are affected. The best way to prevent disease is to give your Polka Dot Loach a healthy environment and provide them with nutritious food. The closer to their natural habitat the less stress the fish will experience, making them healthier and happier.

Anything you add to your tank can cause infections in your tank. Not only some fish but plants, substrate, and ornaments can catch bacteria. Be very careful and make sure you thoroughly clean or separate anything you add to the already established tank so as not to disturb the balance. It is recommended that you learn about common tank infections. Early symptoms and treatment can make a big difference.