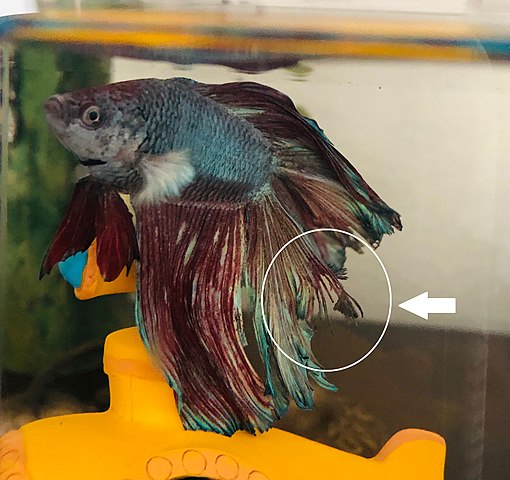 What is the fin rot?

This is a usual disease that leads to the decay of the tail or the fins of a fish, this is caused by bacteria that eats your fish’s fins. These illnesses are easy to treat but can lead to other serious problems – it can rot the whole fish’s body and cause death if left untreated.

Fin rot is not caused by a single type of harmful bacteria, especially waterborne bacteria.

There are many other types of bacteria that can lead to fin rot such as; fungal and pseudomonas fluorescents. Sometimes, both types of infections are seen together. Most times bacteria are harmless as long as your aquarium is cleaned regularly.

The rot of fins begin at the edge of the fins, then it destroys other tissues till it reaches the base. Once at the base, the fish is not able to regenerate worn out tissues, and tissues that are lost, the rot now can begin to invade the body of the fish; this is called advanced fin and body decay.

Fin rot is commonly found in aquarium fish such as goldfish and betta fish. Symptoms may vary depending on how long the fish has been affected:

What can lead to the rot of fins?

More so, it is necessary to manage the situation immediately so that there is no much harm done to the fishes. However, should the treatment not begin early, the tissues may not regenerate when the decay has reached the body of the fish, which is why it is important to start treatment early.

A couple of antibiotics have proven to be effective for the treatment of the chronic inflammation. However, the main cause should be treated so the rot does not re-occur.

How to avoid the rot of fin

Avoid put too many aquatics in the tank, and be on guard for fights between the fishes and also the ones that could nip at each other. Although most fishes are calm, not all species are harmonious.

It is also advisable to monitor your fishes and check if they are compatible to prevent any fighting between them.