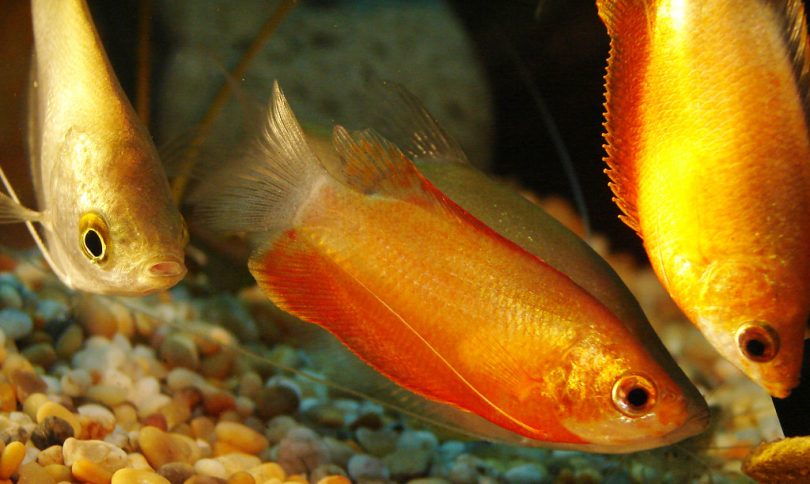 Today, fishkeeping has become a popular hobby that almost anyone wants to venture into. People own different types of aquariums such as cold-water aquariums, freshwater aquariums, marine (saltwater) aquariums, large tanks, breeder tanks and so many other types of aquariums. This is because aquariums help aquarists to reduce stress, blood pressure and heart rate and most importantly, improve their  sleep quality and so on we will put a break on that and be back to our subject matter so that we do not digress.

So back to our subject matter,  a freshwater aquarium is said to be an enclosed ecosystem that needs adequate maintenance to ensure a healthy environment fit for the inhabitants to live in.

In addition to this, freshwater aquarium fish are fish that spend some or all part of their lives in freshwaters, such as bogs, rivers and lakes, with a salinity of less than 1.05%. They possess gills for diffusion of water and also have well-developed kidneys that help them in processing large quantities of water.

And then, coolest freshwater aquarium fish are species of fish that stay within the required temperature in a usual indoor aquarium.

Freshwater aquarium as defined earlier in the introduction page is said to be an enclosed ecosystem that needs adequate maintenance to ensure a healthy environment fit for its inhabitants (freshwater aquatic organisms) to live and thrive in. These freshwater aquariums possess freshwater and little dissolved minerals such as salt.

They are the basic homes (habitats) for tropical fish species and aquatic plants that cannot tolerate salinity, helping to hold one or more of these organisms harmoniously in a community way. Examples of these organisms include fish such as  river dolphins, bluegills, carp, perch, northern pike, trout, catfish etc.

Amphibians such as aquatic frogs, salamanders, newts, caecilians, and tadpoles are found in freshwater aquariums. They can be found almost anywhere there is a source of freshwater but they do not live in saltwater.

The freshwater aquariums are kept mainly for decoration, pet-keeping, feeding, hobbying, and for research purposes. The rivers, bogs, lakes, creeks, ponds, swamps and streams are all freshwater habitats.

These types of fish tend to absorb and  concentrate salts within their bodies through their skin and gills in a salt-deficient environment and they can live in a diverse range of environments. They also have varying sizes

They have special gills which they use to regulate their temperature in the water, and their body is usually covered by scales that help them regulate low temperatures.

These are fishes that are usually within the normal temperatures of an indoor water tank. They include: Neon tetra, golden wonder killifish, American flagfish, bloodfin tetra, Kuhli loach, Koi Angelfish, honey gourami, glass catfish, peacock gudgeon, and so many others, but in all we have listed the top 9 coolest freshwater aquarium fish for you; 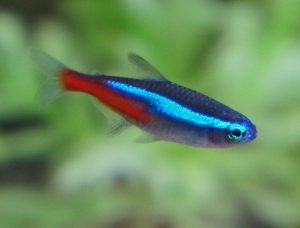 Ranking 1st on our list of coolest freshwater aquarium fish is Neon Tetra. These species of fish are easy to care for, possess non-aggressive temperament and require simple dietary needs making it easy for beginners to take care of.

Habitat: They are freshwater fishes native to South America including Brazil, Colombia, and Peru.

Description:  They can grow to about 1.2 inches. They possess bright and vibrant (blue coloration with red stripes) colors.

Lifespan: They live up to around 5-8 years.

Feeding: They are omnivores feeding on both meat such as algae, insect larvae, and other small invertebrates, and vegetables/plant matter. They also feed on flakes and pellets either live or frozen. They can also feed on blood worms, tubifex, daphnia etc.

Care: Newly cycled fish tanks usually are not okay for the neon tetras because the fishes have little or no tolerance for the changes that happen at the beginning of the startup cycle. The new cycled fishes should be added to an established tank. 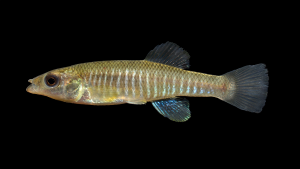 They are very colorful fishes and are made of similar sizes. They are peaceful fishes known for inhabiting the top of the aquarium and surely deserves to be on this list of coolest freshwater aquarium fish..

Habitat: They are found in freshwater and brackish ponds, streams, and marshes of Africa.

Description: The male golden wonder killifish are brightly colored with blue to yellow bodies and possess some orange stripes and spots, while the females are lighter in color.

Feeding: They are carnivorous fishes eating most live foods, including tubifex, and brine shrimps. They eat dry frozen and flake foods.

Lifespan: They can live and survive to 3 to 4 years if they are properly taken care of.

Care: Non-breeding tanks should be decorated with driftwood or peat moss to help soften water and lower pH.Aqueon Aquarium Heater should be used to maintain proper temperature as well as maintain optimal filtration. The water should always be changed promptly. Also, lighting should be reduced. 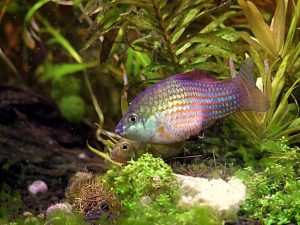 They are known as flagfish or Florida flagfish and are extremely peaceful fish. They have unique color patterns.

Habitat: They can be found in shallow, well vegetated freshwater habitats such as backwaters, marshes, ponds, canals etc.  from Florida south to the Yucatan Peninsula.

Description: They are small in size about 6 centimeters that is, 2.4 inches in length.

The females tend to be larger with more yellow coloration than the males.

Feeding: They feed on algae as well as live foods such as brine shrimp, white worms, tubifex, and prepared flake and frozen foods

Tank condition: Due to their size, these fish can be kept in a minimum of 10 gallons. The tank also requires dark substrates and sand and gravel-based substrates. LED lights can be used to  enhance the colors of the fish. It can survive in a PH range of 6.7-8.2, temperature of 64-72 °F and KH of 6-20 dH.

Lifespan: They have a lifespan of around two to three years but can live up to 5 (five) years if they are properly cared for.

Feeding: They feed on algae and also on live foods like the brine shrimp, white worms, tubifex, and prepared flake and frozen foods

Tankmates: The good companions of American flagfish are Bettas and Guppies. 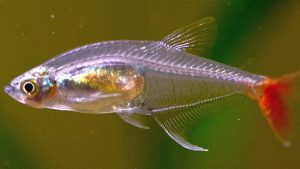 Habitat: They can be found in  Río Paraná  in South America.

Lifespan: They can live to 5 or 8 years.

Disease: They are susceptible to bacterial infections, fungal issues, and even parasitic infections.

Care: Their care and maintenance is pretty easy. 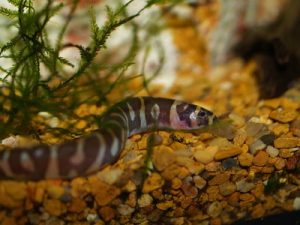 This is a freshwater fish from the loach family that looks like an eel. They do have some scales.

Description: They have unique eel-like bodies. In other words, they are small eel-looking fish. They grow to around 3-4 inches but can also reach 5 inches.

Habitat: They are native to South-East Asia, in Malaysia, Sumatra as well as Borneo. They live in shallow slow-moving waters of streams. 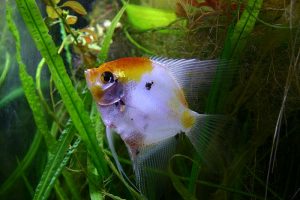 They are semi-aggressive fish and can grow up to 6 inches long.

Description: They have mottled black and white coloration.

Feeding: They are omnivorous feeders and they feed on a variety of foods, such as meaty protein, tropical flakes, frozen and live foods, including bloodworms and brine shrimps.

Habitat: It requires an aquarium of at least 30 gallons and should be kept in mature tropical aquariums.

Care: Change ten percent of the water weekly and twenty-five percent any other week, you can also siphon the vacuum gravel cleaner to keep the filtration clean and good.

They are also known as Royal Farlowella or as the Twig or Whiptail Catfish. They are primarily nocturnal and they are active only during the daytime.

Habitat: They are indigenous to South America.

Tankmates: They are very gentle and are compatible with most other non-aggressive fish and invertebrates. 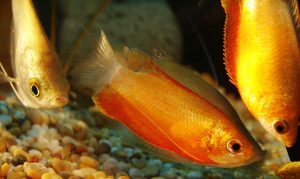 Description: They possess orange-colored bodies and measure up to 2.8 inches. The male species have a more vivid colour than their female counterparts. They have longer fins.

Habitat: They are native to India and Bangladesh and are commonly found in rivers and lakes. 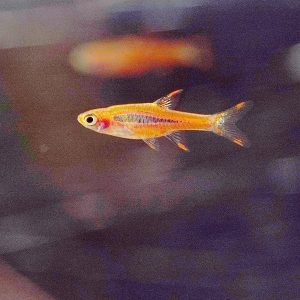 Chili Rasbora or Mosquito Rasbora (Boraras brigittae) is a specie of ray-finned fish in the genus Boraras belonging to the family, Cyprinidae.

It is a beautiful and tiny nano fish found in small nano tanks, planted tanks or as part of a larger community tank where the chili rasbora spend a lot of time learning together within the aquarium and mid-water area.

Description: Chili Rasboras are slender, with their diminutive size which is about 0.7 to 0.78 inches (2cm). Their most noticeable feature is their bright coloration. They have an intense red color with dark stripes running along the side of their bodies.

Habitat: The species are found in the swamps in Asia, more specifically in the South Western part of Borneo, Indonesia. They inhabit freshwater swamps, blackwater streams, pools, and in densely forested areas.

Feeding: Chili Rasboras are omnivores feeding on diets that contain a mixture of vegetables, plant matter and meaty protein. They are micro-predators getting most of their nutritional value from live animals or small prey like mosquito larvae, small daphnia etc. They also feed on Rotifers, tubifex worms, cyclops and others.

Lifespan: They can survive up to about six (6) years.

The cycle of nitrogen refers to the process in which nitrogen moves to plants, animals, and bacteria from the air and back to the air. This cycle best explains nature’s way of creating food for the fishes to feed on and produce their wastes, nature however breaks the fish waste down for it to be reconverted to food (a harmless substance).

First, it’s the decomposition of organic matter like left overs, dead plants, food debris, and even organisms like fishes and other invertebrates’ wastes, and general detritus. While these substances are broken down by bacteria, ammonia is produced.

Secondly, the nitrosomonas consumes the ammonia by oxidation to create another toxic compound, nitrite. Nitrates are removed from the water by live plants.

The third stage involves the conversion of nitrite to nitrate, a less toxic compound by the nitrobacter.

The hobbyist can as well introduce more tank water plants that can eliminate nitrates and ammonia produced by the wastes from the fish. It takes about a few weeks (about 7-8 weeks) for an aquarium to cycle. The nitrogen cycle is very important because it helps to protect the fish from harmful wastes.

Before introducing  new fish into your fish tank (aquarium), you should always put the new fish into a separate quarantine tank for at least two weeks before you introduce them to your main tank.

During this period, the fish are properly observed for any sign of ill health or health issues. If ill, they should be treated appropriately before adding them. This is to ensure that they don’t  carry diseases, parasites, and bacteria into your display aquarium.

Also, decorations should be rinsed with antibacterial before adding them into the main tank. This is to avoid contaminating the fish.

Fish as well as other aquatic organisms are very sensitive to even minor changes in parameters such as temperature, and other environmental changes such as pH, and salinity.

It is very necessary to acclimate the fish before adding them into your main tank so that they don’t experience shock.

The aquarist can use the two different methods of acclimation which include :

In this method, the aquarium water is added at a little (controlled) rate. It helps to reduce stress on the new fish being added.

This method is actualized with the use of an appropriate plastic bag. It is otherwise called temperature acclimation.

Proper Maintenance of the Aquarium

The aquarium must be properly cleaned and maintained if you don’t want your fish and other aquatic invertebrates to die off.