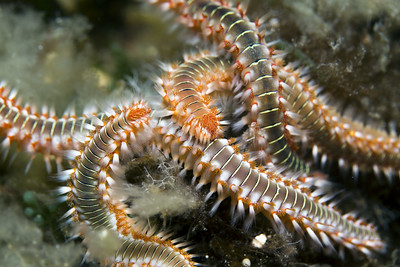 If you have reef tanks, then you must have  probably heard of bristle worms or know a little about them. You might have even seen them but are unable to actually identify them. Bristle worms are the worms from your aquarium, and they tend to also live in live rocks, sand of beach, along shorelines, depths of the ocean, and some other places that have the tendency of being damp.

Bristle worms are small, soft, segmented worms that belong to the phylum “Annelida” and to the class of “Polychaete”, a Greek word meaning “many bristles” or “many hairs”. This is because they are characterized by bristly tufts sticking out of each of the segments of their body. Polychaetes include lugworms, sandworms, clamworms, rag worms, blood worms, and so many others. They are a marine species as well as nocturnals.

They come in different sizes, from tiny microscopic size to their general growth range( which is about one to eight inches long). Their colours also vary as well, they may be brightly colored, iridescent or luminescent.

Bristle worms are both scavengers and detritivores as they feed on carrion, uneaten foods, detritus which includes the bodies or parts of  the bodies of dead organisms, and other fecal materials, plankton and decaying stuffs such as wastes from food, organic matters like algae, leaves to mention but a few.

In this article, I will tell you all you need to know about bristle worms, just read till the final full stop.

The polychaetes are divided into three (3) distinct parts and they include :

(b) The segmented trunk

They have well-developed  head features such as the eyes, a pair of antennae, long and thin tentacles, sensory palps, a nuchal organ lined with chitin which aids the detection of food, the mouth which includes a pair of jaws and a pharynx.

Their number of eyes vary based on the species. In some species such as the ragworms and the  clam worms, they  possess two pairs of eyes while the  green bristle worms possess between two and four pairs of eyes aiding them to distinguish only light from dark. In addition, some species are completely blind while some possess large eyes with lenses which provide a clearer vision.

The mouth can be found between the prostomium and the peristomium. It is made up of extendable and retractable pairs of jaws.

The antennae are the sensory organs of the bristle worms and they are usually short. Most animals without backbones have antennas.

The pharynx plays an important role in their  digestion as it aids feeding and sometimes burrowing.

Structurally, bristle worms have bodies that are divided into repeated segments. These unique segmentations aid their movement. The segments have their own local nerve center called ganglion and a pair of nephridia(sing. nephridium) aiding excretion of wastes

Each of these segments possess a pair of vascularized, fleshy leg-like extensions known as parapodia(parapodium),which vary in shape depending on the species. These appendages help them in movement (locomotion), burrowing, in their feeding processes and respiration (gas exchange) especially in large active bristle worms. They are branched at the ends.

They are chitinous bristles that enclose the parapodia and they aid movement and feeding. Some of the types of setae include: Simple, compound, limbate, bifurcate, pectinate etc.

In addition, they possess a simple but well-developed circulatory system with two blood vessels. The digestive system is a simple tube while the nervous system is made of a single/double ventral nerve cord.

They are mainly marine and can be found inhabiting many habitats such as the depths of oceans, sand in the beach, sand in the reefs of aquariums, some tend to live in live rocks.

Some can live among the planktons, some are active swimmers floating free near aquatic surfaces in open water aquatic habitats such as surfaces and depths of oceans and a few others.

Some are burrowers burrowing the mud or sand, some are tube builders eg, tube building worms construct temporary or permanent tubes in the sediment using their mucus mixed with stone, sand and other foreign materials. The tubes may be straight, branched, U-shaped or spiraled.

Some live as commensals depending on other organisms for their shelter, food and protection while bristle worms with specialized gills or tentacles live as  filter feeders. Also, namanercidirae ( a bristle worm) live in the terrestrial environment. Some can also be found in the tank.

As scavengers, they feed on dead organic matters thus help in keeping the  health of the tank in check. They will help to control algal growth by removing the wastes that would promote algal growth and development. It can be deduced that the habitat of these worms are greatly affected and influenced by their feeding modifications and adaptations.

They play a role in marine food chains and they help recycle organic matter because of their populace in the marine habitat.

There are many different species of bristle worms but we are going to classify them into two major groups(species) and they are as follows:

These species are the free-moving species as they  use the parapodia as their locomotory organelles. They possess segments which comprise of the trunk and a distinct head with two pair of eyes, two palps, a pair of antennae and four pair of tentacles with which they capture their foods.

They are active crawlers and swimmers so they live freely in tanks, crevices or under rocks on seashores. They are scavengers and predators thus they cause more harm than the sedentary species. Examples of errant species include fireworms, clamworms (Alittasuccina ), sea mouse, rag worms etc

These species of bristle worms act as burrowers burrowing the mud or sand or as tube builders living in tubes composed of mucus mixed with sand and other foreign materials. These tubes protect them from predators and aid them in catching their preys. They possess prostomial sense organs which are reduced or lost. They cannot move around or they have very limited movement. They possess special types of appendages that help them capture food.

How harmful bristle worms can be

Of all species of worms, the most dangerous is the bristle worms. Their harms can be considered when dividing them into two forms:

It is also known as the “common” bristle worm. They are lightly(dully) coloured. They are characterized by pink or gray color and are often considered harmless. Although, they may bite when handled ,and they can use their defensive bristles (spines or chaetae) to sting the aquarist or hobbyist when touched. This is why it is very necessary to use heavy gloves when handling these worms.

These worms do not attack live aquatics but they are beneficial detritivores and scavengers feeding on leftover foods, leaves, wastes, already dead or almost dead organisms such as algae, fish and their wastes, shrimps, snails and a lot more. They clean up messes, prevent overfeeding, and devour the algae.

The bearded fire worm is the most detrimental of the fire worm and it is a carnivore which  readily attacks the fish, corals, molluscs, anemones and crustaceans in the aquarium. They also use their strong jaws for biting (feeding) and their venom-filled detachable bristles (chaetae) to inject their toxic secretions containing neurotoxin into their preys. The sting can cause very intense irritation, severe pains, burning sensations which can be reduced using vinegar, alcohol, hydro-cortisone cream, strong skin inflammation or edema, pains, local necrosis, intense itching and numbness of the affected area.

Bristle worms can be controlled through certain effective ways and they are as follows:

Biologically, natural predators can be introduced into the reef or tank in order  to control the bristle worms.

These natural predators not only control fire worms but also they improve the lustre of your aquarium. This method is generally a safe way to control bristle worms but adequate care should be taken when  choosing them. It is very important to make sure to choose species that won’t harm the other animals in the tank.

Bristle worm traps (either store- purchased or DO it yourself mechanism) can be used to capture fire worms especially in tanks with limited space. It is very efficient for catching smaller worms.

It may be important to remove chunks of your live rock from the aquarium so as to make it easier to remove them. This form of method can be very time-consuming and energy-consuming  .It is only efficient if there is only a small quantity of worms in the tank.

This method is best used  when the tank is not overpopulated. In this method, the live rock believed to be inhabiting these worms are removed and placed carefully into a fresh de-chlorinated water. Precaution should be taken as this method is harmful to any other creature using the live rock as it’s home.

Taking proper care to make sure the worms don’t enter the tank is the most important method of control. Make sure that  the new rocks bought  are properly inspected to make sure there are no worms on them before they are used.

Handpicking, use of nets, use of adhesive tapes or removal of  their food source.

Polychaete worms play a great role in the fishing industry because they help provide a healthy environment for the fish to grow.

They serve as food for those in some parts of the world such as South China, New Zealand, example Palolo worms. This is because of their high caloric  and protein content.

Some polychaetes such as nereids, copepods also serve as a source of food to birds as well.

They help in the decomposition and  breakdown of the plant materials /organic sediment matter (bioturbation ) in the sea thereby aiding recycling of organic matters leading to the production of ammonia.

One vital importance of bioturbation is that it helps to keep the organic material from taking the bacteria and making use of all the oxygen. An example of a bristle worm that help in recycling is the benthos

They serve as indicator for monitoring the health condition of the environments (especially, the marine environment) by checking for any noticeable changes in the environment. Biiomakers present in polychaetes can be used to indicate contamination caused by heavy metals or pesticide.

They are used to produce pesticides and insecticides used against pests.

Other species are dug out and  used by fishermen as baits for fishing.

Some of them harm corals, fish, crustaceans, molluscs etc. Some also affect the appearance of the oysters and hence reduce their market value, example is the Fire worms.

Bristle worms help to keep the tank healthy by preventing the algae from building up. It also feeds on unwanted food, leaves, decayed matters, and fish wastes. Example I’d the sedentary worms.

In conclusion, when you’re an aquarist or a hobbyist ,it’s very important for you to remember the two basic types of bristle worm you are going to encounter (The good bristle worms and the bad bristle worms) and the best way to handle and control them so that you don’t expose your tank and it’s inhabitants to great risk.