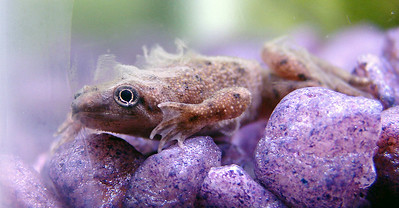 This species of frogs belong to the family Pipidae, and the genus hymenochirus. Generally there are four species of the African dwarf frogs and they are:

More so, these species are usually small and are aquatic yet amphibians that grow up to three inches in size and weigh some ounces.

The African dwarf frogs can easily be take to be the African Clawed frog because they are similar in physical appearance, however the African clawed frog is big and aggressive. Be on the lookout for this distinctions when going to buy either of the two.

It is best to research properly and not rely on a wrong information that could be on the labels of the pet store.

Read through the following sections to see how the African dwarf frogs can be well cared for.

These species of frogs are an amazing addition to the tank, as nocturnal they are very active at night. More so, they are found swimming most of the time, and they only swim up to the surface when they want to breathe.

The life of these species as pure aquatics are tied to the water so if they happen to come out the water for a long time, they get dehydrated and die within twenty to twenty-five minutes.

They do not have any organ of gills like the fishes does, but they have lungs that are well developed, and they swim very fast, one time to the surface to breathe and then they are back to the water, and the process continues while they are alive.

These species are either green or olive in colour with some shades of brown. Their bodies are decorated with spots that have different colours on their bodies. Like we already established, they grow up to three inches, but not more than that.

Like frogs in the Pipidae family, they have same features, like they do not have any teeth nor tongue, their feet are webbed in a way that helps them feed and walk as well. The buccal cavity is mainly used to draw water in, so they eat by absorbing water in their mouth.

More so, these species of frogs do not have any pair of ears, which makes it a puzzle as to how they stay conscious of their surroundings.

It is no rocket science, it is only that nature has provided them with the organ that they need. African dwarf frogs have lines of sensory movement that is close to their bodies with which they feel vibration and movement.

Again, there are differences between the male species and the female counterparts. For instance, in the ovipositor which is a different geographic region, the females are larger in size, while the males have a gland that is small and behind their forelegs.

The use of the gland is speculated to be for mating, otherwise unknown.

Requirements for the Tank and the Habitat

As we have clearly established, the African dwarf frogs come from Africa which is why they are native to tropical forests in the basin of Congo, the freshwater of Gabon, Cameroon, and Nigeria. In these places, the environment is warm and moist.

More so, although they are night crawlers by the virtue of being nocturnal, and are used to having a ten to twelve hour of darkness and light, they need light in the tank.

Again, the tank must be moisty because that is the only environment they know how to survive in.

Hence the next section will show how to set up the tank for African dwarf frogs.

Just like fishes the African dwarf frogs need their tanks to be set up too.

Setting up the tank for African dwarf frogs

For starters, the surface of the water should be higher than its humidity, in this way the frog will not be dehydrated when it leaves the water.

Again, these species are used to dark places and some lights too, which makes light important. However to make it suitable, the lights should be set with timers in within the ten to twelve hour cycle. Like other reptiles or land and water animals; they do not need too many lights, so it is okay to buy standard led aquarium light.

They have very sensitive skins, these skins are sensitive to chemicals so it is important to use a test kit and to have a good filter. Test the quality of water daily, especially when you are changing about twenty percent of the water weekly.

Here are the appropriate water parameters that you should have for the tank:

It is also okay to buy an air conditioner or an air pump because the frogs breathe air too, and for the maintenance of the quality of the water.

These species of frogs are also sensitive to vibrations and noise, so separate the pump from the glass when you install it.

To manage this better, it is best to have an additional layer for installation like a piece of carpet or a Styrofoam between the stand and the tank.

The African dwarf frog also like live plants because they are tropical region dwellers, so it is perfect to add plants that rooted like java fern, or plants that float like the hornwort. While adding plants with roots, make sure they are firmly rooted and covered because the frogs will want to dig round it. Also create hiding places with plants, rocks, pieces of driftwoods, they are used to be prey for big predators so it is best to make them comfortable by providing them with hiding places.

Size of the Aquarium

Aquarists usually begin with a tank of about ten gallon, which is enormous for a community of about four to five frogs. A twenty gallon tank size is suitable too as long as the water is not very deep for the frog to swim freely and easily for air.

Be conscious of the filter because if the filter is strong, it could result in an issues for the frogs. While the frogs are good swimmers and can swim through the bottom of the tank, they do not require currents that are too strong which is why the filter and air columns must be reasonable.

Diet of the African dwarf frog:

These species are omnivores in nature and so feed on plants and meats too. While in their natural habitat, they feed on insect larvae, small fish, brine shrimp, and worms. These foods supply them with the required protein.

African frogs do not need food every day. With good food, they eat well for at least three or four times weekly. Avoid giving them food in excess, only give them the right portion they can have at a time, because left overs become harmful over time and affects the water negatively.

While feeding them, make use of a pair of tweezers that are long, and introduce sound to get the attention of the African dwarf frogs and also show them where they can pick the food. Most times, these frogs are bottom dwellers and like to feed there and so may not swim up for their food, hence the use of tweezers.

Breeding African Frogs can spontaneously happen in aquariums when kept in groups. However, eggs are less likely to survive to maturity. Encouraging your frogs with adequate food and conditions that mimic seasonal changes will increase your chances of success.

While hidden there is a difference between the sexes. When fully grown the Dwarf Frogs are small and have a prominent white post axillary gland that looks like a small lump on the back of each arm. While this plays a role in the production the exact process is still a mystery to science.

Males will also sing from time to time, even underwater! They create a static-like hum that almost sounds like a broken speaker. Females are quiet, slightly longer and robust, especially when carrying eggs.

How to provide care for the African dwarf frog eggs

For these species, the eggs should be placed in a separate rearing tank until hatched within 1-2 days. The 3mm tadpoles initially do not move and use the glue to attach to their place of birth for up to six days. At this time they will not accept food at all.

Once they are on the move, they will embrace smaller foods such as worms, daphnia, and baby brine shrimp. And they can also eat each other.  Weaker tadpoles becomes prey of their vigorous siblings.

It is a good idea to culture the rearing tank with green water and plants like Guppy Grass and Java Moss. This promotes the growth of algae and protozoan in plants and tanks, which are grazing areas for them.

Your African Dwarf Frog tadpole will have hind legs within two weeks and front legs by three weeks of age. They complete their metamorphosis, losing their tails completely, at 1 month of age. At this stage they should be eating adult food; blood worms, brine shrimp worms, and mosquito larvae should all be accepted.

Currently your African Dwarf frogs are about 2 cm long and can be allowed to grow until theybare large enough to be safely introduced into the aquarium!

Are African Dwarf Frogs easy to care for?

They are easy to care for and good for a beginner frog keeper. They are calm small amphibians. They are easily found because they are not difficult to be maintained. Just make sure to provide them with very suitable environments like we already shared, then they will stay healthy and beautiful.

To provide adequate care for your African dwarf frogs it is important to select the appropriate tank mates for your frogs to avoid them being eaten or bullied by bigger tank mates. The best tank mates for these frogs are other African Dwarf frogs. They are very friendly and do well in groups of three or 4. However, you do not have to stick to their own kind always.

There are other good tank mates that can live in harmony with your African dwarf frogs. Some good examples are:

Aside from the above mentioned tank mates, you can also add peaceful fishes too. Pair them with aquatics that they cannot prey upon or be preys too. Shrimps and big but friendly snails  will not stress your frog, which is a good thing.

How can you take care of the African dwarf frogs with Bettas?

This has nothing to do with frogs because they are very friendly. If they are on the more tolerant side then there will be no problem with this. Avoid putting them with bettas that are aggressive.