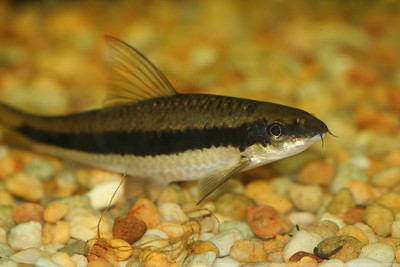 This tropical fish is found on the Southeast Asian continent, including the lakes of Chao Phraya, the Mekong and the Malay Peninsula. Its natural habitats for rivers, streams and forests are flooded during the rainy season. The Siamese algae prefers their natural habitat rather than streams and rivers. More so, they are mostly around the forests regions that are flooded during the rainy season.

Siamese algae are long and slender fish with a brownish-beige color. These species are identified by a bright black line running across the entire physical appearance, the nose, tail, body, and it has an attractive stripe on each side. This black stripe runs through part of the fish’s roastal barbels, a part that has a mustache and the clear caudal fin. This stripe line often withers in the water that helps the fish to hide from predators.

On both sides, the Siamese female algae have a much wider center part that is compared to the slim and sleeker male fish. More so, another thing to look at is the different “swim blader” of this fishes, so the fish is likely to sink if it is not constantly in motion.

Importance of having these species in your aquarium

There are two problems you will encounter when looking for an SAE team in your tank. First, there are several commonly marketed species sold as SAEs (or under more common names such as Asian or Siamese Flying Fox) that look similar as juveniles, but are unrelated and have different care and nutritional needs;

The flying fox (Epalzeorhynchos kalopterus) shares a striking ressemblance with the Siamese Algae feeder and so is often misidentified as the Siamese algae feeder. For instance, the two aquatics have a stripe that is dark yet bright, and runs through their bodies, which makes it difficult to identify each of them. To easily distinguish between these two types, one will have to look out for the flaps that is found at the corner of its mouth; because while the flying foxes have this flap, the Siamese algae feeder does not have the flaps.

Unfortunately, it is a quite difficult task to look through their mouths for while the fishes are alive and active, however one can only guess by understanding the differences in their colours. For instance, the flying fox has a black stripe that is usually smooth and ends at the base of the tail fin. Algae eaters are not very similar and stretch to the end of the tail.

Algae feeders are calm in nature, and this one feature qualifies it for an aquarium community. They are also considered to be social as they are usually in harmony with a whole lot of other fishes and organisms that live in the warm fresh water.

More so, there are some things new aquarists should consider before introducing this species of fish to their aquarium. Algae feeders have to keep moving due to the lack of swimming trunks, you need to provide for them caves, openings, different objects like driftwood and plants in the bottom part of the aquarium as this helps them escape others when they need a place for relaxation from their activeness.

The algae feeder has a behaviour that is very warm and friendly, and can be considered to be social, as they are always in motion, as well as constantly on the lookout for algae and other plankton commonly found at the bottom of tanks.

Should the Siamese or SAE ever be aggressive, do well to observe the scenario, understand the situation and find out what transpired in the aquarium and which must have initiated such aggression.

Sometimes, the fish may have to be kept differently from others as the fish can be naturally territorial, and it is more strategic to have one or five of these algae feeder, an attempt that imitates the natural habitat and controls the tendency of being territorial.

Conditions of the habitat.

While in the natural habitat, Siamese algae eaters are mostly found in the streams and the dense rivers of Southeast Asia. This tropical water is slightly acidic and rarely has a quick current. Moreover, beneath the surface, one could find different logs, plants, and rocks that serve as shelter.

Again, the Algae feeder is torn between food search areas and hiding away in habitat. They often prefer habitats where they have familiar organisms as they are not very good explorers.

Conditions of the tank

Since they spend a lot of time at the bottom of the tank, or near the bottom, having a sandy substrate provides them with a safe environment to swim and not hurt any of their sensitive barbels or their bodies, introduce plants to the tank to perfectly mimic their natural habitat.

There are chances that the fish could nibble on other plants if they do not get food as much as they need. Hence, making sure they are well fed and being healthy is one of the most assured ways of preserving the plant, and introducing species that grow quite fast is a necessary strategic option, plants like the hornwort which can recover quickly if certain portions are fed on.

Fishes despite their species like to have a place of solitude which is why they live at the bottom. So, build caves and openings within the aquarium to help them hide away. Many species of fishes jump although some jump more than the others; the algae feeders jump out of water or the aquarium easily because they are usually very active hence, close the aquarium lid all the time at all times.

The Siamese algae feeders can have a lot of aquatic mates because of their calm appearance and nature, hence they thrive in an aquarium community. While they dwell in beneath the water in the tank, remember that there are also other bottom dwellers too. This consciousness is important because aquatics that dwell beneath are usually aggressive bullies and could be quite territorial.

So you must be mindful to avoid them attacking or feeding on the algae feeders; by implication avoid cichlids, and red-tailed sharks that bully others to protect their environment because algae feeders are too peaceful to win a war like this one.

However, you can introduce less aggressive bottom dwellers like the angle fish (or corydoras), the danios, the guppies and other small fishes like the tetras. A fish as large as barbs and gouramis can be introduced because despite their sizes, they are not aggressive.

The feeding of the fish is paramount for the fishes as well as the aquarium owners. So they must be well fed in order to maintain healthy living. The good thing is that the Siamese algae eater are natural omnivores and so are not selective as they feed on plants, insects (dead or alive), fishes and other organisms too.

Feeding in the Natural Habitat

Feeding in the Aquarium

To get the Siamese algae feeders on their best mode, it is best to create a similitude of their natural habitat in the aquarium. For instance, this species loves a variety of algae that fortunately grows inside the aquarium so you have to introduce algae to the aquarium. Many fish experts recommend that they should be fed with a combination of fish foods that include natural foods that are proteinases and are based on plants too. Commercial feeds and supplements can also be introduced, but do not overfeed the fishes nor underfeed them.

Also, excess provision of protein could make the fish forgo their favorite algae menu. Water conditions and tank size, taking care of the species of Siamese algae feeder does not require lots of stress or luxury to be done.

You can make plans to have about twenty-five to thirty gallons of water to enable them stay active and have fun in the hideouts. Maintain a water pH of six point five to seven point zero replicates good conditions of water and nutrients that are common to this species of fish in their habitat.

Keep the temperature at seventy-five degrees Fahrenheit to seventy-nine degrees Fahrenheit for a better environment since the SAE live in freshwater rivers and streams that have low currents like most tropical fishes, and the solubility of the water should be between five and twenty dH.

Algae Eaters are prone to very few diseases. They can be affected by some of the most common problems affecting other types of freshwater fish tanks. However, they do provide clear symptoms and can usually be treated quickly and easily.

Ich is one of the most common diseases in freshwater areas. A small parasite causes the disease, which can be identified by small white dots on the body of an infected fish. This is usually preceded by your fish rubbing its body against a rock or other scratchy spot in an attempt to scratch the ich.

Be sure to make sure temperature of their water is warm enough for your fish when they are sick. They work best in warm water, which means that your fish can perform better and healthier and by simply rising at a gradual and mild temperature until the right temperature is reached.

Thoroughly rinse and clean any decorations you may have in the tank. Do not add anything new to the environment while SAEs are under treatment.

Although the SAE are not aggressive and are easy to handle, they are not bred in the same way as other fishes. In fact, they are known to breed in fishfarms using hormones. So having these fish to mate is not very easy and a keen attention must be given. The female SAE are usually thirty percent bigger when they are fully grown.

Breeding may be facilitated by the changes in the texture, PH, temperature, and other properties of the water. However breeding the SAE in aquariums is best handled by experience.