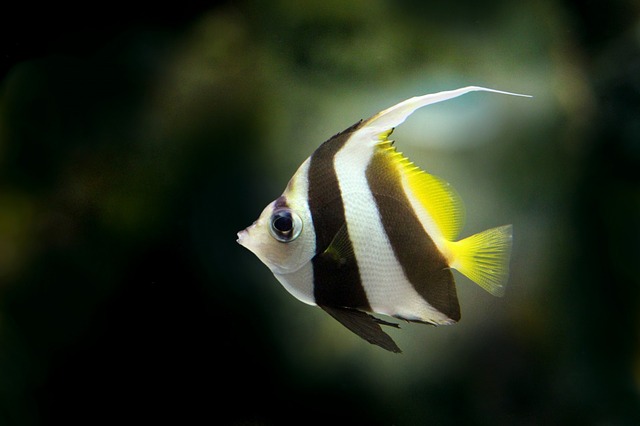 In this article, we will be guided on how Angelfish brings forth their younger ones, their mode of feeding, tank mates and basically everything  you should know about this fish. Angelfish originated from the Amazon basin in Peru, Brazil and Colombia.  They are found mostly in Western Pacific Ocean, Atlantic Ocean, Warm waters and Saltwater.

Angelfish has its specific name as Pterophyllum scalare and belongs to the family of Cichlidae and class of Actinopterygii. Angelfish as the name implies are really angels in the water, their fin looks more like angel wings that makes them dive beautifully.

Angelfish can grow up to eight to twelve (8-12) inches long and can weigh at least two (2) pounds. Though there are some of their species that are larger the twelve (12) inches, those species grow up to twenty four (24) inches and weigh up to four (4) pounds, while the smallest species like Koi Angelfish grows up to five to six (6)inches long

This unique creature, Angelfish are not known to be aggressive, they are peaceful species of fishes which are used in different homes in different countries as pets. Their ability to recognize the owner that feeds them regularly and guests  for a longer period of time makes them exceptional.

Once they are happy, it will show all over them, their swimming style changes and they tend to swim faster in the middle of the tank, but due to the fact that fishes are unable to cry out, they use silence to express their pain.

It is very significant to know that Angelfish are not poisonous if they are properly taken care of. They are served as a delicious meal when they are baked, fried or boiled. This is to explain that they are edible.

Angelfish can survive in tanks with other tank mates, but before considering putting them in the same tanks with other fishes and livestock, there should proper examination of those species, if they can accommodate Angelfish as their tank mates, and if they are aggressive in nature. For instance, Lionfish and Triggerfish should have no reason to be in the same aquarium with Angelfish.

Of Course Angelfish have numerous species like other sea creatures, in this section of the article we would be enlightened on the various types.

Black lace Angelfish has its origin from the Amazon Rainforest in the Southern part of America. They are not commonly seen and quite expensive as compared to other species of Angelfish. The Black lace Angelfish fish do not like noise, so they prefer a very quiet environment especially during the spawning period. They are not active swimmers and live in the temperature of about seventy five to eight two degrees fahrenheit (75-82°F) and a pH level of about 6.5- 7.0.

They are very rare to find unless a significant effort is made. Clown Angelfish are more peaceful than any other species of Angelfish, and are very easy to maintain and care for. Their suitable aquarium is mostly with vegetation and hiding places. They can share tanks with other compatible fishes and peaceful livestock.

The Gold Angelfish is found in Western Pacific Ocean. They are also known as the velvet dwarf Angelfish, Golden Angelfish are easily identified by their reddish orange colour marks all over their body with a dark circles eye. They are not aggressive and easy to be taken care of.

This species can grow up to a maximum length of six (6)inches.

Black veil Angelfish is one of the most common Angelfish and has dark circles black set of eyes which are slightly darker than the Black lace Angelfish. Their fins grow longer as they get older. They are known to make home in both harder and softer water, as such they are very peaceful and can share tanks with other less aggressive species and livestock. They can grow up to a maximum length of seven (7) inches.

These sets of Angelfish are beautiful with mottled black and white colour. Their younger species have red eyes that fade out as they get older. The Koi Angelfish finds it preferable to live closer to rocks and driftwood. They have a lifespan of up to ten (10 ) years and above once they are kept and fed with their suitable diet. They are compatible with other fishes and livestock provided the tank is large enough to contain with a suitable pH level.

The Zebra angelfish live mostly in Western Indian Ocean. They are one of the largest species of Angelfish fish and can grow up to twenty five (25) centimeters in length. Their name is derived from the famed white and black stripes on Zebras’. They feed on zooplankton (tiny invertebrates that float in water).

The silver Angelfish fish is found mostly in the Amazon river basin of the Southern part of America. They are fragile and grow to be tough when they are mature. Their average adult hood length is about six (6) inches length. While in an aquarium with other compatible species, the tank should have a minimum capacity of thirty (30) gallons or one hundred and twenty liters. The aquarium temperature should be maintained with a steady temperature of about twenty four to twenty nine degree celsius (24-29°c) and a suitable pH level of 6.5- 7.8.

Angelfish can live alone, but if they must stay with different species inside the aquarium, it is best you pair them. If others are paired, the odd one out suffers from the other paired ones which may eventually die due to bullying. Angelfish tends to grow large when they are mature, therefore when considering their aquarium, a larger rank upto fifty five (55) gallons and proper maintenance should be given to them.

Breeding simply means reproduction. This is the act of bringing new offspring into existence. Fishes are oviparous organisms that are animals that reproduce by laying eggs and fertilizing them. At the age between six to twelve months (6-12 months), Angelfish becomes sexually mature during this age period.

Angelfish looks very alike, it’s always very easy to distinguish the male from the female. The only means the Angelfish farmers identify the sex of the fish is when they lay eggs and which one is fertilizing them.

If there is no display of papilla during this period, that is to show that the fish is unhealthy and needs proper treatment.

During mating the female fishes go about looking for a suitable place for mating. This is known as nesting. The male fish go about checking if the nesting is okay for the female and safe from predators.

Another sign of mating behaviour in the fishes is their aggressive nature, most times they become Territorial and chase away other fishes around them in order to create a private space for their mating.

This section will enlighten us more on the behavioural signs of Angelfishes when they are pregnant as discussed below:

When  Angelfish are about laying their eggs, they tend to clean the smooth horizontal surface where they find comfortable to lay their eggs. The amazing fact about Angelfish is that they learn parenting on  their own. The first time they lay eggs, they may probably eat up the eggs, in the next batch, they turn attentive parents by knowing how to fertilize the egg.

The Angelfish lays up to one hundred to one thousand (100-1000)eggs at once. It is possible for them to lay eggs every seven to ten (7-10) days. After laying of eggs, they hatch one percent to five percent ( 1%- 5%) of the eggs if they are kept in suitable condition.

If the eggs are white in colouration, this means that either the eggs are not fertile or they have fungal or bacterial infection that must have killed the egg.

After about seven (7) days of laying the eggs, the fry will start developing but will not swim. They will cling to their parents’ body at this period until a certain month is reached. The fry will be at this time fed from the mucus their parents body secreted.

Angelfish are omnivorous organisms that are fed on both plants and animals. They feed on all types of frozen foods and live foods. They special duets are insects, Crustaceans, Smaller fishes, Rotifers e.t.c

There is a need to give them healthy foods and balanced diets in order to let them perform their activities effectively. They should be fed at least three to four times (3-4) in a day. While feeding them, it is advisable to feed them little by little, if not, there may be uneaten meal in the tanks, this can cause the tank to be dirty there by exposing them to unhealthy conditions.  There should be constant monitoring when feeding them  in order not to get them overfed.

These fishes tend to be healthy depending on the kind of food given to them. Proper feeling habits will boost their immunity and help them fight against diseases.

One of the most significant things to pay attention to about Angelfish is the health state.

Parasites, fungus and diverse viral infections can all have an effect on your angelfish. Of course, the primary line of protection towards sicknesses is supplying right tank situations on your fish.

Good water coupled with a varied and balanced food regimen can pass an extended manner in making sure that your angelfish expands a sturdy immune gadget which could push back many diseases.

Though there is a say “prevention is better than cure”, it is quite true, but there are some times amidst the very best prevention, diseases still strike.

Below are some diseases, their symptoms and possible treatments you need to be aware of when choosing tank mates for Angelfish.

Dropsy seems because of an underlying contamination due to a bacterium that’s commonly to be had in aquariums; however , there are issues if the immune device of your angelfish turns into compromised, as a result of this infection, kidney functions may be slower.

Once you notice these symptoms, at the earlier stage of the disease, put the affected fishes into a separate tank that contains Epsom salt to help remove the excess fluid.

If this disease isn’t noticed at the earlier stage, that means it would be very difficult to save the life of the fish

This is caused by a protozoan. When you introduce tank mates with this disease together with Angelfish, they spread it, this can lead to ich on other fishes. If treatment is not carried out immediately, there will be loss of the fish.

The water should be raised up to eighty six (86°F) degree fahrenheit. Giving the fishes anti parasitic medication at the early stage will help fight against the disease.

This disease can be caused by Flavobacterium Columnare which are present in the tanks when they are not cleaned properly.

Removal of the fish from that tank should be the first remedy, then introducing antibiotics to the contaminated fish will help them. If it is not noticed at an early stage, the fish may die.

The mind blowing thing about this fish is not just only their appearance, but their behaviour even when with other species. These fishes should be properly taken care of in order to maintain their lively character. It is significant to make sure they are fed well with food enriched with proteins and fibres so as to help their immune system.