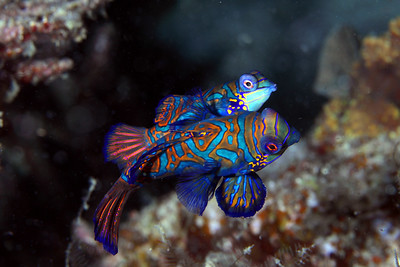 If you are into fish keeping, one common question you may likely get is how fish mate. This article will share details of the fish’s reproductive life and how the species of fishes breed.

We also will discuss how you can create the right conditions to properly breed them in your aquarium. All living things have the reproductive organ with which they reproduce for the continuity of the beings and race, including the saltwater fish and the fresh water fish. Apart from their different varieties, all fish share two common characteristics. First, they are vertebrates, which means they have a backbone. Any aquatic organism that does not have a backbone does not belong to the fish family. Another factor is that they only live-in water and cannot survive on land.

Other than that, some of their features are very different, including different ways of mating and starting a new life.

How do fish mate?

In order for reproduction to happen between the fishes, an egg and a sperm have to meet. This happens in various ways but must involve the testicles and the eggs. A good number of the species of male fishes have two testes that are equal, and could be totally merged, while the female fishes have eggs. However, a few species are hermaphrodites too. There are also species with a second organ called the genital papilla, which is fleshy but small tube that is seen behind the anus from which the semen can be extracted.

Genital papillas, which play a key role during the release of the egg or sperm cells which is another important reproductive factor in fish. The papilla of the genitals is different for both the male fishes and the female fishes. That of female is round and broad, while that of the male is pointed and big.

So how do fishes mate?

This happens when the eggs laid by the female species are fertilized by the male’s sperm. A lot of the female species lay too many eggs at once because the eggs require lesser energy to develop than it takes to develop an embryo in their body. The fertilization can be done in  various way; it could be a male fish who rubs his reproductive organs on the eggs then releasing sperm directly on the eggs, or removes the sperm within the water to meet the eggs at the layers of the zooplankton how they were laid.

The process of laying eggs belong to either of these categories: 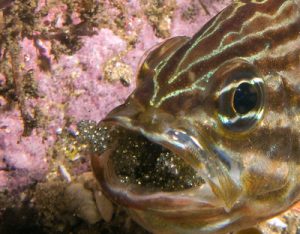 In the mouth brooders category, the female lays her eggs and the male fertilizes them. Then one of the fish collects all the eggs and holds them in its mouth until they hatch. Examples of mouth brooders are (Bettas, Cardinal fish, Blennies, Gobbies & freshwater Cichlids).

While the length of time varies depending on the species of fish, some might mouth brood for weeks at a time. In most cases the male is responsible for carrying the eggs and during this time he eats less or does not eat.

The benefits of Mouthbrooding include complete protection of the eggs up to hatching and high levels of oxygenation with constant flow of water. The eggs are kept easily clean and turned into a process again.

In some species, their fries are totally on their own once they are hatched. While some are given care until they look like small adults, at this stage they can swim very well and can escape predators on their own successfully.

Do fish sleep? Find out all you need to know about betta fish sleeping patterns

It is made from a bubble nest that are built by the male and the female species or materials of plants, then the male builds it as it lays eggs. These foam nests are blown up in areas where there is a lot of oxygen and a source of food, increasing the survival rate of the offspring.

After hatching, both parents care for the children. (Bettas, Gouramis, Bluegills & Stickle-backs).

In this category, the female fish scatters her eggs while the male follows closely to fertilize each egg. The female fish lay sticky scattered in places but are mostly within the places that have coverings while other species can lay the eggs that are free to move in open water. (Tiger Bards, & Goldfish).

Egg depositors, lay their eggs on one particular spot usually on the glass of the aquarium and also beneath the substrate. Then the male swims down to the bottom of the substrate to fertilize the eggs.

Egg buriers go into the substrates that are quite soft, or the female is pushed by the male to soft subtrate where it lays. Then the species of male fish gets into the water to have the eggs fertilized. The peat moss is suitable for the substrate of breeding tanks (Killifish).

Within a month, the female will release a hatched fish, also called a fry or larval fish.

These young fries are fully formed and ready to swim from the time when they hatch. Soon, they start to look for food as they need to survive. In this sense, it is the strongest survival since the fish hatched and plunged into the water.

As for the mother fish, she can continue to release a larvae fish once a month for the rest of her life, without the presence of a male! Therefore, this mating type the sperm of the male is required only once and after that, the female is independent enough to continue breeding alone.

Most survivors have fries that fewer but bigger than those that lay eggs because the fry has to be well developed and be enough to stay independent once it is born.

There are fishes that breed on their own without the help of a mate. All these fish are female and give birth only to females. There is no need for a male presence. Although we cannot call it mating, because it shows that the role of sperm is not entirely in the reproductive process.

Occasionally, females may come in contact with male fish of different species (closely related), but sperms are not used for reproduction.

When a male change to a female, the process is called protandry and when a female changes into a male, it is called a protogyny. However, both breeders also require the opposite sex before it breeds. For example, the clown fish has this form of hermaphroditism.

Each clown fish group will consist of two large fish, one male and one female. All other small fish are all male. These fishes live among the sea anemones. When a female fish leaves a group, its mate switches to the female and the next largest fish increases in size to become the new female’s partner.

In another specie called the Indo-Pacific cleaner wrasse, there is only one male fish while the rest are female. When a male fish leaves or is killed, the female becomes a male and the next big fish grows into a mating mate.

This is a very complex process on how fish do mate, the female releases her eggs and the male fish releases his sperm into the water. Both fish release eggs and their sperm in close vicinity, but the fertilization occurs by chance. Not all eggs are fertilized by sperm.

Frys (young fish) from this breed are able to adapt well to survive from the first seconds. This is because none of the parents are there to protect the fish from harm.

This type of breeding is also called synchronous or mass spawning. Examples of fish that mate in this way are jellyfish, sea anemones, clams and fan worms.

When are fishes mature enough for reproduction?

Organs for reproduction grow slowly for they are not required for survival the fishes are born. However sexual maturity varies in fishes because it is dependent on the age and species of the fish.

Some fish start to reproduce very quickly after birth and some require more years to mature before reproducing.

How frequent can fishes mater or reproduce?

The cycle is different for various species. Some breed severally in the space of one year, while some die once the egg or sperm is released, and the others breed only once.

In case you are new to breeding, it is safe to begin with livebearers because they reproduce easier than the egg layers. Platies and Guppies are species that do not need any special condition or much help and so are best for beginners. With the experience from breeding livebearers, one can start with the egg-laying species like the Danios and Barbs. Again the parents mate easily without any help which is why it is easier to breed livebearers once their frys are born. And the fish can lay hundreds at a time. They prefer quantity over quality and it works well enough.

However, small fries are also weak and are mostly eaten before they are fully grown. Also, livebearers tend to have a well-developed young frys compared to other fish.

How to breed Fish in Your Aquarium

Breeding fish in a home aquarium requires careful monitoring and preparation. It is not as easy as simply sticking a male and female species together and hoping for the best.

The biological differences between species can vary greatly, but there are a few common features that you should look for. Female cichlids, for example, tend to have more rounded bodies and less pronounced vents, while males tend to show brighter colors and sometimes have a slight hump on their head.

The fish is not in its natural breed which means that you will have to create the natural conditions  for  breeding, Consider the species and what they require. Some need empty tanks while some require certain plants. It is all dependent on the species of fish in question.

However the temperature of the breeding tank should be about ten degrees Fahrenheit above the usual temperature, and the PH as well as the hardness levels should be the required level for each specie. Also keep the female fish apart from the male fish to increase the urge to mate when they meet.

Remove the parent fish from the old tank. Once the female has laid her eggs or gave birth live, remove the frys from the tank and put them in another. This will protect the eggs from being disturbed long enough for the fry (newborn fish) to hatch. Keep the tank conditions the same.

Cover the tank on 3 sides with paper or pieces of fabric thick enough to block out too much light from the outside. Newly hatched eggs and fish are often sensitive to light – much of which can be frustrating or even kill them. As they continue to grow, their tolerance will increase and you can restore the aquarium to its original light levels.

Practice draining the tank by 25-50% and adding fresh water at the same time each day. Clean water is needed for the fry to learn to breathe and filter on their own.

When the fry hatches for the first time, they come armed with a large yellow egg sac that provides sustenance for a few days. Once the egg sac has disappeared, you will need to start feeding them egg yolks, crushed fish juice, plankton and algae are examples of foods used for feeding fry.

There are different ways fish breed and reproduce. Some species of fish easier to breed when compared to the others, so it is good for beginners to take one step at a time by beginning with the easy ones.

The tank conditions and the process of mating varies from one species to the other. Understanding all of these factors is important in fish breeding and for keeping them in an aquarium.