Raising freshwater puffer fish can be challenging to maintain but it is very rewarding for experienced aquarists. This fish comes in many colors and sizes. Many species have special and unique hunting techniques that are amazing to look at. They are best known for their toxic substance, known as tetrodotoxin. But don’t worry, they can’t produce it themselves so it’s not very dangerous in captivity.

Continue reading if you want to learn about their habitat, tank, diet and how to take good care of them.

Although they look cute but they are aggressive and very territorial – especially during the breeding season. Freshwater puffer fish can immerse themselves in water or air when they are stressed or frightened in some other way. They are ferocious predators with many hunting techniques.

The Golden Puffer and the South American puffer swim on the rocks and on the ground in search of prey. They swim over plants or oyster beds in search of small crustaceans, snails to eat.

The red tail dwarf puffer prefer to stay hidden. They are often found on the riverbanks and in areas with many hiding places and attack from the shadows.

The last category of hunters is known as ambush predators (such as the congo puffer). They dig in the sand, wait for the fish to pass, and then comes up to kill them. A bad habit that most puffer fish have, is that they are fin-nippers which are species of the Auriglobus and Chonerhinos.

Another unique behavior observed by many species is their ability to blow or splash water on a substrate to find hidden prey. They are known for spitting water on the surface to ask for more food.

Puffers are found in river systems throughout Southeast Asia, parts of India and Bangladesh, the Amazon basin in South America, and the Congo, Nile, and other rivers in Africa. A few species occur in open water, but most are found on the riverbank often among immersed plants. They live in temperate and tropical climates.

Freshwater fish are susceptible to diseases, so you need to provide the best environment for them. These fish thrive in water at 7.0-7.6 pH with temperatures between 74 ° -78 ° F. Other water restrictions such as water hardness and currents depend on the species and their habitat. Most varieties will fit in a tank with low water current dKH between 8-12.

Puffer fish are generally more sensitive to deteriorating water conditions and are more susceptible to levels of nitrate, nitrite and ammonia in water. They also produce a lot of waste so a good filter is compulsory with 50% recommended water that is changed weekly. Its important you setup your tank with a double filter system with heaters and a special lighting system.

Freshwater fish do not have scales and are therefore highly susceptible to ectoparasites. The most common parasites are Protozoa that live on gills, fins and skin.

Another common parasites among freshwater fish is known as Ich disease caused by the Ichthyophthirius multifiliis. This can be easily remedied by raising the temperature of your aquarium.

Prevention of this disease is always best. New additions to your aquarium are carriers of disease and germs. Try to be careful when introducing new things to your aquarium and make sure you separate them. Fish without scales, such as Puffers, are more susceptible to diseases because they do not have the first line of defense, scales.

It is very important that you are very careful to maintain proper water conditions and to keep your tank clean. Investing in a good filtering system will prevent many these problems.

Aquarium size depends on what species you want to keep. For example, Dwarf Pea Puffers (C. travancoricus) can be kept in aquariums as small as 5 liters, while some species require 20 liters or more per fish. Some large species do not require as much space as you would expect depending on their size because they spend a lot of time motionless.

These fish are better kept alone. They are finished nippers and easily bored. However, there are a few species that can be kept in pairs or in small groups, other species such as Dwarf, Redeye and Golden Puffers, can be kept together or with other fast-moving fish such as danios. Others, such as Mekong, Nile and Mbu Puffers, should be kept alone. For the most part, fresh water puffers should be considered species tank fish.

Puffer fish are considered omnivores, but prefer meat-based foods. In their natural habitat they often eat snails, crustaceans, shellfish and other fish.

They will eat a lot of whatever you put in the tank. You can feed them raw, frozen and dried meat. Larger puffers can eat small frozen fish such as lancetfish or whitebait fish. You can also feed them vegetables and plant-based foods once or twice a week.

Their teeth are an important factor to consider as they grow throughout their life. You may need to feed them with hard substrate animals such as shellfish, crustaceans or snails to help them control the growth of their teeth.

If their teeth grow too long, your fish will have difficulty eating and you will need to clip them. Depending on the size of your puffer fish, they require different eating habits.

Breeding puffers in captivity is very difficult, freshwater puffer fish are known to breed in captivity. Different species require different water limits and conditions. Also about their temperament, finding the a pair for them can be difficult. If you are lucky enough to get a pair, the hardest part will be raising the fry.

In many cases, fresh water fish are extremely protective of their eggs, but when hatched their parents will eat them. Providing enough food for the fry is very difficult and they are sensitive to water quality. You can feed them with brine shrimp. All these challenges make breeding these fish and raising the fry very difficult. 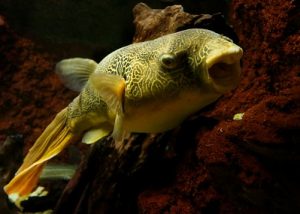 “Congo River Puffer” by greg_mason is licensed under CC BY-NC-ND 2.0

As the name implies, Congo pufferfish is native to African rivers. They grow to about 6 inches in length and will spend most of their time buried in the sand at the bottom of your aquarium hiding from dangerous predators. Many colors are available, including black, sand and red, and Congo will also change its color to the surrounding area other than blue. They require a large tank and are very sensitive to nitrates, so the water needs to be filtered. 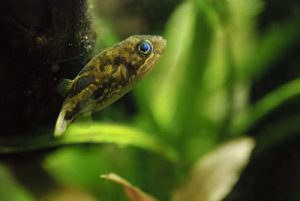 Dwarf pufferfish is also known as Pea pufferfish and Pygmy pufferfish. It is one of the smallest pufferfish in the world and is seldom larger than an inch and a half. This species is very popular with aquariums because of its bright colors and small size. It is much easier to find the right aquarium size and filter needed in Dwarf than many other species.

These fish are very aggressive, and only experienced breeders should try to have one of these species. You will need a tank at least 60 inches long with strong filtering skills, and you will also need to plant dense vegetation. These fish are also known to bite your fingers while feeding which can cause a painful bite. They can grow to about 16 inches in length.

Golden Puffer comes in light black form. In the simplest version, the pufferfish has a white body filled with yellow dots. In the dark form, the black body has yellow spots. They have round bodies with small fins set at the back. There is a teethlike projections on their skin like a type of sandpaper. When puffed up, these projections are more visible. There are some very large fish that can reach about 20 inches long when they are fully grown.

Imitator puffer is also known as Dwarf Malabar Puffer, and is another type of small pufferfish. This fish is a bright yellow in color. Males are lighter in color than females, and females have darker spots on their bodies. Although it is a small fish, they will still need an aquarium with at least 30 liters of water. 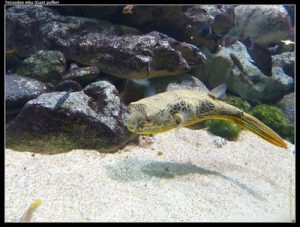 “Tetraodon mbu” by Joel Carnat is licensed under CC BY 2.0

Mbu Pufferfish is a very large species of pufferfish that can grow up to 26 inches) in length. These fish are difficult to care for in the aquarium because it is difficult to supply enough space and filter to keep them healthy. Therefore, we recommend this species only to experienced pufferfish keepers. MBU pufferfish have a unique pattern in their bodies that can change as they grow.

Ocellated pufferfish is one of the rarest species found. This species is a captive fish now taking over the rivers and streams of South Asia. They are more peaceful than most other species and prefer to be kept in pairs. You can also put them in a smaller aquarium than most others and it only requires 20 liters. However, you will still need a solid filtering system. 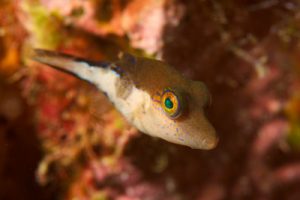 “Green Eyes” by laszlo-photo is licensed under CC BY 2.0

Red Eyed Puffer is a collection of four species of pufferfish all with red eyes. This type of pufferfish is known to be more aggressive than most and is very difficult to care for. Because these fish are usually very aggressive, it is best to keep them in an aquarium alone without other pufferfish. Although they rarely reach 2 inches, they need a larger tank because they produce more waste. We recommend an aquarium at least 32 inches tall. Many living, tall plants will also be needed.

Red-Tailed Dwarf pufferfish is a small species that grows to about two inches in size. They prefer low-acid water and aquariums with many living plants. The males in this species are much larger than the females, and have dark brown bodies with brightly colored stripes on its lower sides. Young females have brown spots with a different shape and marking. Male and females have red eyes and red tail fins. 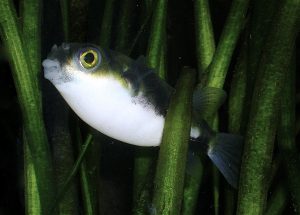 “File:Colomesus.jpg” by Neale Monks is licensed under CC BY-SA 3.0

The South American Puffer is one of the only pufferfish living in groups in the wild. In the aquarium, however, it is one of the most difficult fish to care for. We only recommend skilled aquarists to buy this type, and yet, we only recommend getting one if you have a very large tank suitable for more than one. Well-maintained, it has attractive gold and black stripes.

The South American Puffer will need a rectangular tank at least 47 inches long. Water will need to be heavily filtered, and dense vegetation will need to be planted. You will also need to give them hard food because their teeth are accustomed to growing, and you may still need to manually clip them.

The Target Pufferfish grows to about six inches in length and needs a tank at least 35 inches in length to thrive. Strong filtration is required. Target pufferfish are nocturnal predators and are very active at night.

Pufferfish can be very rewarding if you are able to maintain a good environment for it to grow. Most puffers can be quite large, and the smaller ones have a different personality than most fish species. It is always important to find a tank large enough with good filtration, so commitment is needed in advance as most of these fish live for more than five years. We recommend one of the smaller species, such as the Dwarf Puffer, if you are new to pufferfish.