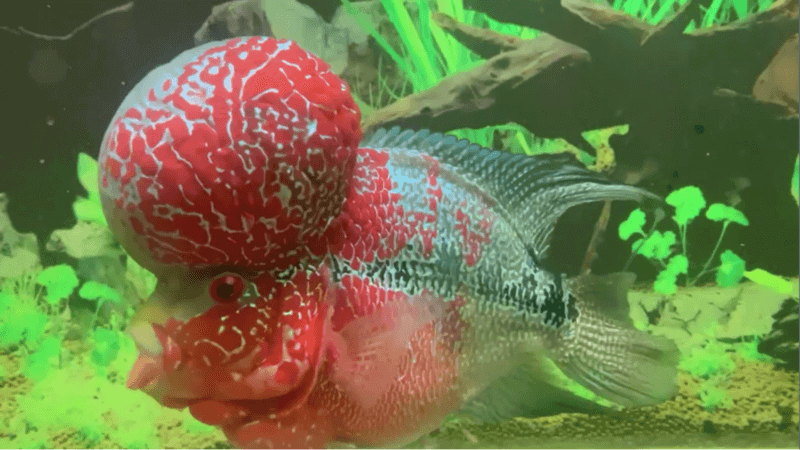 This fish often appears as if it swam directly to a ledge and got a terrifying bump. The bump on its head is the nuchal bump and is also identified as kok. More so, the build up of the bulge in the forehead is also caused by hormones while male cichlids swell at the time of mating. They are rarely seen on the head of the female species but when on the males, the sizes are smaller. Nuchal bump serves two purposes.

The first is for the purpose of fat storage, and the second is for the sexual recognition.  So when you see any cichlid with a swollen or bulgy forehead, you already know the aquatic is looking to mate.

Flowerhorn cichlids fish are known for their distinctively bulge of the head and their colour or kok is formally called a nuchal hump. They are very popular among Asian fish hobbyists. They are also kept by hobbyists in America, India and Europe. There is a ban on their import into Australia.

The bumphead is the largest parrotfish in the world and biggest of all the species of the reef fish.

The parrot fish uses its parrot-like beak to scrape off algae from rocks and dead coral; crush the calcium that is not edible, then it is again release to the rock as sand.

Bump head parrot usually have a big protrusion on their forehead which resembles the sheep’s pair of horns. The biggest males also have the biggest bums which they often use as battering rams through the time of spawning, crushing heads to enemies just maintain the territory, show dominance and having the rights to breed.

Bump head parrotfish were most commonly found in red sea, western pacific and Indian Ocean. However, there has been a very sharp decline in these fishes which they are now protected only in specific places.

Bump heads have certain characters that makes them very vulnerable for over fishing, which often results in the many parts of disappearance. The bumped parrot fish species has a life span of about forty years, and do not mature till they are between five to eight years, then they can possibly have low mortality like the adults.

For a bumpy head, fish known as bolbomaptopon muricatum the giant bump head fish which is 4 feet in length and weighs up to 46 kg in weight known for its bumpy head. Its whimsical look gets a boost from pouty lips and yellow to pale face.

A female Bolbomatophone (lower fish) and a male (upper), reflecting the differences between the sexes in forehead and size; the female’s forehead is tilted caudal towards the beak, but in males it is almost parallel to the beak. The males are usually larger than the females.

Lumps and bumps on tropical fish

There are also a number of diseases that cause bump on fish head;

Bumps that suddenly appear are often as a result of an infection from bacteria. Should bacterial infection be the cause, the disease heals sooner like a mere boil. Then pus comes out like a fluid that is white, after it has been fought by the white blood cells. Do not squeeze or break the lump because like the boils in human body, squeezing pus into the fish’s blood stream can have fatal consequences.

It is not ideal to close a wound that has a drainage till the bleeding is over. The bacteria that cause this type of lump are aeromonas or the columnaris.

The aeromonas wounds are white around the edges and are red around the center, while the columnaris wounds are red around the sides and white within the center. They are both terrible gram bacteria and trimetheprim and most sulfa antibiotics are best for treating them. You can use Roomet B, add to water and mix to their food. A few researches show that fishes could be predisposed by some materials of carbon filter, even though the mechanism is not yet known, good nutrition makes provision for vitamin D supplement, phosphorus, and calcium, then avoid too many crowding.

White bumps on fish almost always indicate illness or injury, although sometimes the bumps are completely normal, but it’s advisable to quarantine the fish with bumps from other fish to avoid infecting others.

Stress plays a factor in fish with bump on the head which can be as a result of fighting with other fishes or scraping against sharp objects such as tank decorations.

Removing the stress factors goes a long way in reducing the chances of diseases.

Any other bumps and lumps can be handled with the use of permanganate potassium which can be gotten from most pharmacies around you. To use the potassium permanganate, take one drop stock pp which is equal to about two ppm in a gallon, this pp is often used for about 3 days, or 4 treatments every other day.

Do 20-30% water change before adding a second dose, if the water does not clear?  Observe for about fifteen minutes or more when you have added the pp to see if there are any negative reactions, turn the lights off because some of the water molecules could deactivate the PP. The colour should bepink and remain pink for about four hours to get effective. Avoid the eyes, gills, and mouths of the fish, and apply one at a time.