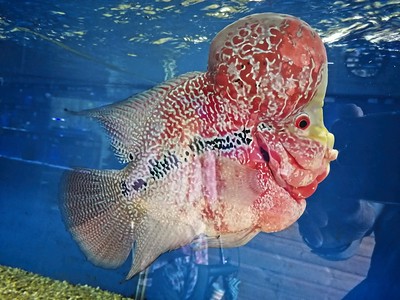 The world of aquariums is enormous and brings balance to the ecosystem. Are you thinking of how to begin an aquarium farm whether it be for subsistence reasons, or for commercial reasons, or even for the fun of having it, just like people have animals kept as pets in their homes.

Flowerhorn Cichlids are decorative or ornamental fishes best and usually identified with their glowing colours, and oblong shaped hump on their heads; a very distinctive feature that could be the only seeming thing not very beautiful about the bright coloured fish. However, they are named as a result of their very bright and vivid colours, as well as the distinct shape of their heads, this shape is usually called a “nuchal” hump or kok.

More so, they are artificial hybrids that do not exist in nature. They are hybrids that exist as bait or food for other fishes, Cichlids like tilapia are mostly food fishes, while flower Cichlids like Cichla are highly valued hunting fishes or for game reserves. Flowerhorn Cichlids however, are usually well known for their adaptive features with which they have evolved rapidly into different closely knitted yet structurally diverse species that inhabit large lakes.

We will be sharing in this article a care guide for Flowerhorn Cichlids so that you can give your fish the exact care they deserve ranging from their Tank mates to their diets, and other tips. Read through the end and enjoy the ride.

First it is important to note that Flowerhorn is just one species of Cichlid. However, like other fishes, Flowerhorn Cichlids have scales, possess  eyes for sight, have tails and fins, and triangular mouths. They are rarely big in size, and can camouflage to fit in an environment as a result of their ever changing bright colours.

Of course it is common knowledge that every living thing has different species, family, class, and generally types. In this section, we will be looking at the different types of flowerhorn Cichlids, or varieties as you may prefer.

Flowerhorn Cichlid hybrid stock were initially referred to as “luohans’, a chinese word following the buhdist concept of “arhat”.

Here’s a carefully compiled list of the four major types of Flowerhorn Cichlids:

The Zhen Zhu Flowerhorn is also known as the ‘Pearl Flowerhorn’ and is famous for its pearling, which is its strongest characteristic of this type of Flowerhorn Cichlid.

Interestingly, this variety of Flowerhorn Cichlid is said to have been discovered or come to existence after the flowerhorn Cichlids called “kamfa”. And it has very amazing features which include the following: a pronounced head flower, a round but weak tail, a large buccal cavity, and red bulgy eyes. Being a very pearling flowerhorn and a very fertile one, rearers often cross breed the Zhen Zhu flowerhorn with the other types of flowerhorn so as to reproduce a more appealing flower line or pearling for the next filial generation.

The first breeders of the Golden Monkey Flowerhorn were Lam Soon and Lam Seah. It was bred at Malaysia, Bercham, and Ipoh, as an original Luohan habitat fish, unlike Kamfa and Zhen Zhu that are usually mixed types of Flowerhorn.

The Kamfa flowerhorn like other flower horns originated from the Luohan habitat, and can be bred with a Flowerhorn other than its type. Kamfa Flowerhorn cichlids are usually have white and yellow eyes, some of them have red eyes, but they all have eyes that are small or what humans recognize as melancholic eyes (their eyes sunken deep), a nuchal hump that looks like a head bump that is water coloured, smaller lips than that of the Zhen Zhu flowerhorn, a larger but square body, and a flat fan tail.

There are other types of flowerhorn cichlids that belong to the Kamfa family and they are as follows: King Kamfa, Kamfamalau, and Thaisilk.

However, the following are striking features of the King Kamfa flowerhorn cichlid of the Kamfa family:

A double flower row on the lateral line that is usually black, and a heavily thick white pearling.

Being generated first from Thailand, this type of flowerhorn Cichlid, has also seen a very recent rebirth in the country of Vietnam. As expected, its body is typical of a Kamfa, with a flat fan tail, and a body that is longer than the body of some other species of Kamfas.  In the family of Kamfa, King Kamfa is a very expensive flowerhorn Cichlid.

The Kamfamalau  is a crossbreed  of a Kamfa flowerhorn male and a Malau flowerhorn female. Taking the appearance of a Kamfa, The Kamfamalau  has fins, a tail, and a sunken eyes. Like the Zhen Zhu, the Kamfamalau’s main feature is its appealing pearling. The fin typically is a “frosted” pearl, an appearance that is rarely found in any other varieties of the  flowerhorn cichlids.

Aesthetically, it’s pearling usually crosses all the way across the kok or nuchal head hump, which is also another significant difference in the different types of flowerhorn.

The Thai Silk flowerhorn cichlids of the Kamfa family usually takes one of the following colours; gold, white or metallic blue.

A variety of the Thai silk Kamfa breed flowerhorn cichlids has been bred. This new breed of Thai Silk  has a more square body shape like a Kamfa and their eyes are usually red,or yellow, or even white. Like the initial Thai Silk Kamfa breed discussed in the preceding paragraph, the breeding of this one is also not very clear because it is said to be that this particular Kamfa breed is usually cross bred  between the White Tigers of the Texas lineage; a pure Texas cichlid and a Vieja (different species of cichlids).

For instance, faders go by the nomenclature faders because in the early stages of life cycle, they usually lose their vibrant colours, and turn black completely. But they continue to fade, and as the fading process continues, the black gradually fades away completely, then a very bright color covers the scale. It is usually yellow or red as the case may be.

Here are the colours in grades:

Hexamitiasis is a disease that results in a hole in the head of flowerhorn cichlids. The disease is caused by a water parasite called hexamita that is usually found in the gastrointestinal tract of a fish of which the flowerhorn cichlids are not exempted.

This parasite is caused by malnutrition, overcrowding of the tank, careless shipping, and dirty water or poor water quality which enables the massive reproduction of the flagellated protozoan responsible for the reproduction of the parasite hexamita. More so, the hexamita has three different species that inflict ailments on fishes and they are as follows: Hexamita intestinals, Hexamita salmonis, and Hexamita truttae.

When a flowerhorn cichlid or a fish is affected by the parasite, the flowerhorn Cichlid gradually begins to develop tiny  lesions around its flanks and on its head.  Like most parasites, the hexamitiasis disease can be very deadly especially if it is not detected and properly treated early enough. If the hole in the head is treated as soon as it is detected, chances are that the infected flowerhorn cichlid will get cured and survive the ailment. Albeit, the aquarium could be physically damaged or discovered depending on when the ailment was discovered and treated.

Just like it is safe for humans to seek medical care and attention, it is also safe for veterinary doctors to be given the opportunity to give infected flowerhorn Cichlid the medical care they need.

However, in cases when it is difficult to take the fish to a veterinary doctor, one can attempt to treat the flowerhorn cichlids of hexamitiasis by purchasing  and using an over-the-counter medication that can be gotten from any good local fish store.

Overtime, as the parasite’s life cycle  progresses, Ichthyophthirius multifiliis moves out of the body of the flowerhorn cichlids and attaches itself to the pond or tank where the flowerhorn Cichlid lives. The parasite repeatedly splits itself into one thousand more cells, and rapidly multiplies. The cells mature, then hatch and a new cycle begins the process again.

The parasite leads to bacterial and fungal diseases which deal tremendously with the flowerhorn cichlids. However, it is easily spotted because just as the name implies, it leaves white spots and patches on the body of the flowerhorn cichlids. When infected, the fishes rub themselves against the tank or against each other trying to find some form of comfort.

Sadly, white spots disease is contagious and affects all types of fishes and aquariums, it also affects human beings. Should your fishes be affected by the white spot disease, kindly visit any local fish store around you because delay can be very deadly.

These preceding sections have laid a foundation for us up to this section which is the crux of this article. In this particular section, we will be sharing with you dear practical and do it yourself (DIY) care guides that could help you take absolute care of your flowerhorn Cichlids.

This will include best breeding techniques, diseases prevention, tank mates, behavior and temperament, and a whole other technique required for a proper flowerhorn cichlids care guide. We will begin with disease prevention.

One care guide that must not be left out is the disease prevention tip. Prevention is always better than cure.

To achieve this, clean the Tank thoroughly, maintain a good filtration system, and change the water weekly also, wash any new flowerhorn before introducing it to the Tank as a tank mate. You can begin by quarantining the tank for at least two weeks to be certain that it’s healthy. More so, Flowerhorn feeds on a meaty diet that is best  supplemented with cichlid pellets. So daily healthy feeding will keep the fish healthy.

The flowerhorn, though pearling and alluring, has a temperament that directly opposes its harmless appearance. However, because of the aggressive nature of the fish, it is best to keep them singly, otherwise the pair or mates must be put in bigger tanks, spacious enough to accommodate them especially when their aggression comes knocking. You could also design obstacles that could be used to mark their territories in the Tank. This is also applicable to breeding pairs, set up a spawning tank to help the female hide when the male becomes aggressive.

Flowerhorn cichlids are amazing species of cichlids that require great expertise so that the fishes do not end up dying. More so these decorative fishes could be used as a decorative piece in your home, you just need to be able to put it in a well kept Tank.