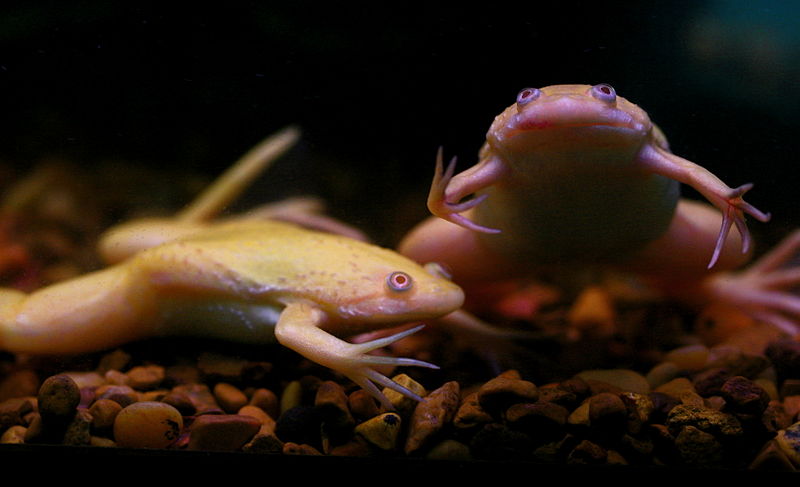 If they start getting what looks like fat, especially if their belly is increasing in size, there’s a good chance the female is laying eggs.

Is my African clawed frog bloated?

Okay, so, if your frog looks like it’s getting too big and fat, you might be worried about bloat or a disease known as dropsy.

Here’s how to tell if your ADF is bloated VS pregnant;

Common pain in African clawed and African dwarf clawed frogs as a result of large amount of fluids stored in a frog’s abdomen.

From my research I have found that it is caused by an infection with a certain type of bacteria dropsy, which affects the lymphatic ducts that properly drain body fluids.. This fluid can be broken down naturally by the frog’s body if given proper conditions or medication.

Bacterial cases of the condition, which are often fatal, appear suddenly, while inflammation associated with dietary problems occurs gradually.

Frogs are so guilty of eating the things that they should have no business eating as it is not part of their diet, like rocks and gravels from an enclosure that can cause them to swell. In addition, it has been found to be higher in frogs that feed mainly on fatty foods such as bloodworms and beef heart. This is probably because the bacteria that cause inflammation may be present in the digestive tract or in the epidermis of the bloodworm.

Infections resulting from poor diet are not contagious, while bacterial infections can spread from one frog to another in the habitat. It is advisable to quarantine your frog during this situation.

If the frog is the only resident of its own tank, it can stay there. If there is carbon in the filter, remove it before treatment. The filter is not needed for the treatment tank.

Other forms of treatment also include;

If your frog is suffering from the bacterial form of the disease, you should try to reduce the number of bacteria in the tank as much as possible. Begin by completely emptying the tank and removing all substrate, plants, filters, and cage furniture.

Sterilize the tank with a 10 percent bleach solution and leave it full for 24 to 48 hours. Empty the tank and wash it thoroughly with clean, fresh water. Allow the tank to air dry for the next 24 hours, wash it one more time, and fill it with dechlorinated water.

Feed them small meals once or twice in twenty-four hours. They can have a little bulgy stomach from this feeding routine. While there is no danger in not feeding the adult frog who can hunt for their food, it is important to attend to the young frogs.