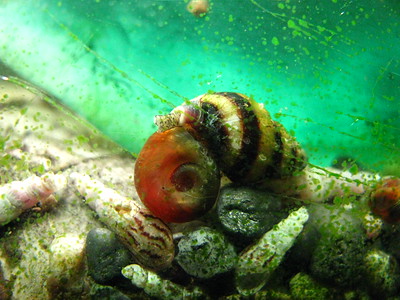 Assassin snails are a different species of snail whose nomenclature also is clea Helena. The first time I heard about the “assassin” snail, I wondered if the snail was a hired assassin in its former life, and if it abducted other snails or other invertebrate animals. I knew my thoughts were far from the truth about the assassin snails, but I just liked the feeling I got from that wondering.

However, in this article, I will show you all you need to know about this specie of snail, tank mates, feeding, size and care guide for the assassin snail. Ensure to read till the very end so that the snail does not take unawares like the name implies when you want to start rearing them.

Some parts of the snail have been described already in the introductory section of this article. Notwithstanding, it is important to state that the assassin snail is a very beautiful snail largely because of the shape of the shell of the assassin snail, as well as the colour of the assassin snail. They recline to their shell when they sense danger; and they get the comfort they need from their fragile shells just like the other species of snails with its trap door that looks it in. By the trap door, I mean the operculum.

So if you want to buy the assassin snail, you now know exactly what it looks like, and you just need to go to an aquarium and store and make your choice there. Also be careful enough to distinguish the assassin snail slightly has a resemblance with the bumble bee snail, so you should not mistake the two.

FACTS YOU SHOULD KNOW ABOUT THE ASSASSIN SNAIL

The assassin snail is a recluse species of snail, very beautiful and attractive, yet enjoys its own company the most; it is a loner probably because of its solitary nature.

They hide a lot because that is part of their activities in the wild or outside an aquarium; they hide until another snail crawls by. Almost like they have an appointment. So, when you do not see the assassin snail crawling through a surface or clinging to a glass or any object at all in your aquatic tank, then there are chances that the assassin snail crept out of the tank and is buried in the sand or has hidden itself in the sand, especially if you have sand around the area where the aquatic tank has been placed.

More so, the assassin snails are more active at night. I told you I thought these snails were real assassins, now you see that they are also nocturnal, so you will not have to blame me for thinking that they were hired assassins in their past lives; such species of snails.

Nothing was created to be all by itself, even the island has trees and other creatures in them, so the assassin snails coexist with other aquatic animals or plants, and we will be sharing those here.

The snub assassin snails co-exist with a few aquatic animals that will be listed here. Before they are listed, it is important to note that they can live with bottom dwellers and top dwellers in the aquatic tank or in a pond. More importantly, the assassin snails cohabit better in aqua spaces with a community of gentle fishes

Some aquatic tank mates who relate better with the assassin snail, or who can coexist in the same aqua space as the assassin snail are: the cherry barbs, the anglefish, the neon tetras, the celestial danios, the corydoras catfish, the guppies, and the pearl gourami.

The assassin snails can breed very well in freshwater. This species of snail often lay eggs in the water, they lay a lot of eggs, but they lay them one at a time till all fertilized eggs are laid; just like a woman who has a set of twins, or a set of quadruplets, or even more. You know the babies will not come out at once even if they were just two, in fact, the body comes out one part at a time, till the baby is properly delivered.

The comparison may not appear balanced, because a woman delivers a baby, that is a human being, but the assassin snail lays an egg, or lays eggs and does not lay snails or deliver of snails, instead it is the eggs that mature and get hatched.

So here is what the egg of the assassin snail looks like.

The egg of the assassin of snail is in a seemingly rectangular shaped enclosure, usually attached or stuck to a lava rock, a driftwood, an ornament, the aquarium glass, or other hard surfaces or solid objects in the aquarium tank or in the aqua space. More so, the colour of the egg itself is yellow, just like most yolks are yellow, like the egg from a live chicken, whether it be broiler or layers.  It is important that you know for a fact that it takes the egg of the assassin snail two months to hatch and become a real assassin snail.

Finally, if you intend to breed more, you should take care of the eggs properly until two months, which is the time it takes for the egg to hatch, if possible, you should transfer some of the snails, or better still, transfer all the snails and other tank mates to another fresh tank, or to another aquatic tank, to stop the assassin snails, and the other tank mates from eating them up, or destroying them. However, if you do not need more of them, especially in the freshwater tank where they are more fertile, then be sure to destroy the eggs, or leave it visible to the snails, fishes, and other tank mates that can eat them up.

THE FEEDING AND THE DIET OF THE ASSASSIN SNAIL

I am very happy to tell you that feeding the assassin species of snails is not a difficult task. Always remember that this species is an aqua space sweeper or an aquatic tank cleaner. They are a carnivorous invertebrate that sits mostly and very comfortably by itself and the depth of the water waiting for what to devour.

This can be said again, again, and again. This is one of the easiest species, or aquatic animals and invertebrates (animals without a backbone), a new aquarist can keep. If you are an inexperienced aquarist, or if you are just starting your aquarium, or your aquatic tank, then it is a good decision to start with the assassin species of snail.

Remember that another key to taking care of the assassin species of snails is having a great size of tank, and the stability of the atmosphere in the aquatic space,  or aquatic tank.

Finally, should you decide to add a new species  to an aquatic tank, or the habitat, you have to do this carefully, take a very gentle approach to that, its okay to be slow while doing that so that the other species already in the tank does not think it’s an enemy around and become aggressive such that they attack one of their own. Ensure that the visible aquatic tank water  in your plastic bag is the same or compliments that of the parameters of the new aquatic tank water as much as you can. .

The size of this species of Snail is not very different from the sizes of other species. So when you go to an aquarium store to buy this type of species, you will notice that the sizes range from three inches to four inches, sometimes above that, depending on how well it is fed.

Unlike this species that are usually about two inches long in size, the assassin species of snails, when in placed in a healthy aquarium, or aquatic tank, or aqua space, and is well fed, and genera inhabits in very habitable environment, under suitable conditions, this species has the potential of growing up to four inches, and can actualize that potential.

So should you want to buy one or any species of snail, and you are kind of discouraged because of the size, do not be dismayed, just ensure that the aquatic tank, or aquarium, or aqua space, or pond, whichever at all, just ensure that the space is sufficient enough for the specie size , and the quantity, as well as the capacity to assist the life of an adult specie.

The assassin snail is a very good tank cleaner! It does not feed on live plants, and its carnivorous nature keeps pests and insects aware because it feeds on them.