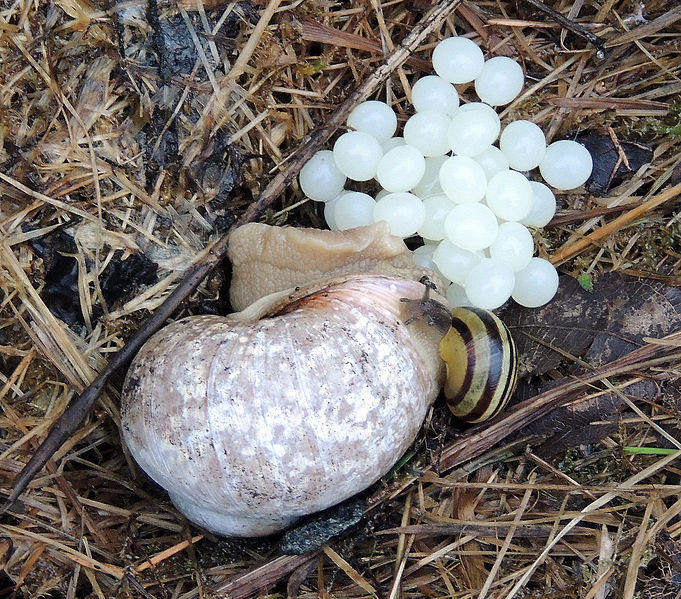 This article will bring to us knowledge about snail eggs, its incubation, hatching and breeding process and other interesting tips to generally know about this animal. Snails are beautiful terrestrial animals that are largely known for their sluggish movement.

Their peaceful nature has made them loveable pets in homes in some parts of the world. The shell of a snail can be used in decorations and ornamentals.

They possess a vascular eye with no ear at all, they relatively interact in the environment with their very sharp sense of touch and feelings which gives them a good edge to detect vibrations. Snails can be found in environments like deserts, ditches, and abyssal sea depth.

Species of snails possess a very nutritional value to the body, an average snail possesses a significant amount of protein (15%), water (80%), calcium, iron and vitamin A which helps build immunity to fight against disease, and strengthen the eyes.

Are there different species of snails the name snail is most usually carried out to land snails, however, there are numerous specific kinds of snails. In fact, there are over 4000 snail species that still includes distinctive sorts of sea snails and freshwater snails. It is generally known that some land snails are amphibious; they can be seen in both land and water.

This Snail originated from Africa, but now can be found in every continent, with about eight inches long (8″). They have two shades of brown, the darker and lighter brown. The lighter brown gave a vertical stripe mark on the shell. It is known for its life span of about five to seven year (5-7yeras) or even ten years ( 10years).

Giant African land Snail as the name implies lives in the land and are generally known for their unquenching and unsatisfied cravings for crops and vegetation. Due to the invasive species and nature making people regard them as pets.

This snail has a distinctive shell pattern that keeps it unique amongst other types of snail. The yellowish and brown spiral stripe marks on the shell makes it beautiful and want to be kept in homes. They are smaller species that grow to the length of 1.3inches and the adult moves with the speed of 0.029mph. Garden snails are originally from the Mediterranean region, Western Europe, Northern part of Egypt and Asia. They feed on cereals, different types of fruit trees, garden flowers, rose bushes and lots more.

Long ago, the Roman Snail only existed in the European part of the world, but now, it has spread to every continent. This snail has a beautiful light creamy brown shell that makes it different from others. They prefer to live in humid temperate areas where there is little or no rainfall.

This particular type of snail has a different smooth wavy shell pattern with a brownish colour almost turning into brownish gray. This sea snail are edible species. They prefer to hide in between crack rocks and tidal pools or under seaweed. Their special duets are algae which they mostly scrape out from the cracked rocks

Limpets are aquatic snails that exist with conical shapes and a hard muscular foot. They belong to the class of Gastropoda. They existed from different ancestral gastropods, meaning they are polyphyletic.

Limpet sizes vary from two centimeters to about twenty two centimeters. There are different species of limpets, though most of them possess synonymic features. Their colors vary, from white to brown to sandy. This type of snail feeds on algae and vegetative organisms and yet turns prey to bigger fishes.

This species of snail comes with different colours, Golden,  blue, and it is the most popular aquarium fresh snail that is purchased. It is advised to keep in a larger and spacious tank because they grow up to six inches (6″). Apple Snail had the ability to adapt in tropical regions, wherein durations of drought are alternated with durations with immoderate rainfall.

They are considered pets in some parts of the world because of how fine they are.

They are freshwater snails with a maximum of 2-3inches. Mystery Snail is most times misplaced with apples because of the colour and shape appearance. The obvious difference is that mystery snails can not grow as large as the apple snail. They are originally from the United States. Mystery Snails are peaceful and therefore can be kept together with other sea creatures like fish, Shrimp and plants.

What really makes them unique is the ability to breathe from their grills and also the tubes that extend out of their body.

Terrestrial snails are pests because of their large appetite for food, most times they eat up the plants causing crops to have low yields. Sometimes you may wonder how this happens since their teeth are not obvious. Most times it is difficult to control because introducing of pesticides and herbicides to the crop may cause loss of the snail

Many aquariums reproduce by laying eggs, the different species lay their eggs where it’s mostly suitable for them. For example some sea snails lay their eggs on the surface of the water to prevent some snails from eating fish like loaches preying on them.

In very moderate temperate conditions, Snails are able to produce about 100 eggs, in other words, some snail species can have up to four hundred (400) eggs and above. Land snails search for damp locations to lay their eggs. They lay eggs with shells that keep the baby snails from drying out.

Freshwater snails do not bother their eggs been dried up, They lay eggs in long, gooey strings beneath  water or on water plants.

It is obvious that every egg should pass through the incubation process before hatching. In this section, there will be more to learn on how snail eggs are incubated and all the process involved.

The incubation process of snail eggs

Generally, incubation can be defined as a process by which something mostly eggs are kept in the right temperate conditions until it develops and finally produces young offsprings, or it can be simply explained  as the process by which oviparous organisms, that is organisms that lays egg keeps it’s egg in warm condition until young ones are produced.

Incubator in the order hand is the device or equipment that makes this development and growth of the young ones possible.

How long should snail eggs stay in an incubator?

Snail eggs will definitely not stay in an incubator forever, there should be a time frame the incubation process will take. The only thing is to keep monitoring the process until it’s finally achieved.

Unlike other egg laying animals, for example hen that stays over twenty to twenty one days (20-21days) at some stage in incubation, snail eggs are recognized for his or her twenty one days to forty days (21-forty days). This way that the hatching system can begin someplace across the twenty one day (21 day) of the incubation

Ways to care for the Snail eggs while they are incubating.

There are major ways to care for the snail eggs  they are incubating, this will possibly make the incubation process a lot easier and safer. In this part of the article, we will briefly get enlightened on how to go about this.

If you keep snails as pets, you can use tupperware air holes and commercial snail farmers can fill the pen with soil for about fifteen centimeters to twenty centimeters (15cm-20cm) levels from the ground.

Hatching snail eggs is most times a great challenge to the snail farmers, but in others sense, it shouldn’t be because it is one of the easiest processes so long as you follow up with cautious

Lack of true information may cause great mistakes during the incubation process of the snail egg which will possibly affect snail egg hatchability.

This section will teach how to properly hatch snail eggs without destroying them, and how to take care of the new hatching and maintain the health of the eggs. It will be a guide to both pet snail rearer  and commercial snail farmers.

How to hatch snail eggs?

If the steps below are properly taken, hatching of eggs should be made easy and there will be no much loss.

You wonder why your eggs didn’t hatch properly. Obviously there are reasons behind the poor hatching of snail eggs, let’s discuss in detail why those eggs do not hatch properly.

Eggs are naturally fragile and should not be exposed directly to sunlight. Do not set the incubator directly to the sunlight because eggs can easily break.

There is this superstitious belief that says if you touch an egg with bare hands, it will not hatch again. This is not legally known, but it’s recommended that eggs should be moved with plastic spoons.

Every living organism should reproduce. Bringing forth life is one of the characteristics of a living thing. In this section, we will be enlightened on how snails bring their offsprings into existence. This part is called the reproduction process.

Reproduction also known as breeding can simply be defined as the bringing forth of young ones into existence.

Snails are oviparous in nature, meaning that they give birth to their offsprings by laying eggs.

The ones with both reproductive organs most times do not need another snail to reproduce them, but thereby make more offspring by themselves. This act is known as asexual reproduction.

During the mating period, the snail releases a chemical that will signal and attract the mating mate since they do not have ears to listen to sounds unlike other animals. Snails are known to  go through mating rituals which involve playing and kissing one another. This process takes them some hours.

At the last stage of this courtship, some mature species of Snail use what is known as ”love dart”. When they come close and their genital organs touch one another, they shoot their love darts. The risky component is that once in a while darts can harm an inner organ or undergo the frame and go out on the alternative side. The mucus that covers a dart consists of a kind of hormone able to grow the possibilities of achievement to have offspring.

Mode of feeding in snail

Snails are living organisms, so therefore, they need food in order to grow and perform their activities. Most terrestrial snails are Herbivores, while others are omnivores and sometimes even carnivores.

Herbivorous animals are those organisms that feed chiefly on plants. The Herbivores eat different varieties of plant parts such as the bark, stem leaves e.t.c. Some prefer algae and mushrooms although these sea foods are very nutritional.

In other words, omnivorous animals are those organisms that consume both plants and meat. Omnivores can encompass flowers and animals into their diet, however usually, those animals choose different terrestrial animals, so they turn predator and eat up smaller species like annelids, slugs,  worms and to a minimal extent plants.

Carnivorous organisms are those animals that basically diet on other animals. They chiefly feed on the parts of meat. Carnivorous snails  feed on several species of organisms for example Powelliphanta, which originated from Zealand, eats slugs and earthworms and other terrestrial animals.

Snails feed on a whole lot of meals discovered in their herbal habitat. What they eat relies upon wherein they stay and the species of snail that they are. Some traditional meals are plants, fruits, vegetables, and algae. Plants which might be loss of life are frequently a terrific meal for them, and additionally they consume sand or soil whilst searching for calcium to get a thicker shell.

Snails need to feed on meals that consist of huge quantities of calcium to maintain their shell hard. When seeking out meals they use their effective feel of smell.

In conclusion, We all know every creature has its own beautiful and interesting part. Snail is undoubtedly one of them. Their peaceful nature, ability to live with other species has made them exceptional.