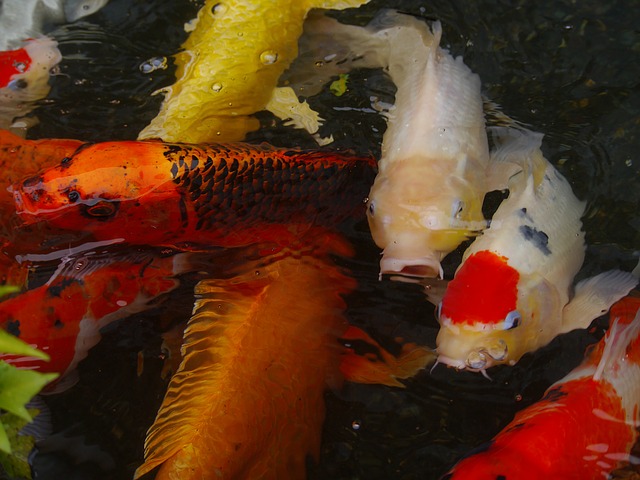 If you are trying to find the answer to the question ‘Can koi fish and goldfish breed together? Well, we’ve got you covered. Yes, koi and goldfish can breed together as both are a type of carp fish. They can lay eggs and breed with each other, especially when kept together in the same tank or pond.

These fish are quite rare.

A lucky few have seen them pop up at their local fish store from time to time, but for the most part they are difficult to get a hold of. It would certainly be a fun experiment for a breeder to try making this and make it more widely available for those looking for more unusual scale types. Before we dive into how koi and goldfish breed together, it helps to understand more about both.

Are koi and goldfish the same thing?

We answer this question with a plausible, “No!”. Although they look alike with characteristics that differ in their body shapes, they are not the same type of fish. They both originated from the carp family, but the type of carp they came from sets them apart.

What do the offspring of a koi-goldfish look like?

There are a few characteristics to look for when trying to identify a goldfish hybrid.

There is a myth that koi and goldfish hybrids are brown in color and that is how you can tell they are hybrids. Indeed, all goldfish fry are brown until they are old enough to acquire their true color.

This usually happens around 3-4 months of life of the fish. The colouration of their offspring depends on their parent gene. Of course, other factors also affect coloration, but it is rare for a goldfish to remain brown throughout its life and contrary to the points described above, it is not a characteristic of a hybrid.

It is a typical hybrid between koi and goldfish.

With qualities like these, I’m surprised they aren’t the more popular pond fish and bred for commercial sale.

I have seen many backyard ponds over 500 gallons in size and hybrids would be a great fish for those types of ponds. You should also try adding plants as well. Hybrids get bigger compared to goldfish, but not as huge as any and will not tear up plants.

Difference Between Koi and Goldfish

How to breed koi and goldfish together

Warm pond water encourages spawning. Unless you are constantly monitoring your pond, you will never know when spawning occurs. An important indicator of spawning is a foam-like film on the surface of your pond water.

So, are you interested in breeding koi more goldfish? Let’s take a look at an easy DIY breeding setup and system.

The spawning season usually occurs when the water temperature rises during the summer. Plan ahead and get everything done before your fish is spawned.

Do koi fish get along with goldfish?

Although they may look alike, they are not the same and usually require different care and attention. If you are considering keeping either (or both) species as pets in the same aquatic environment, you may be wondering, can they survive together and live favourably? Well, the answer is…

Yes, koi and goldfish can coexist peacefully in captivity, provided they are the same size and kept in a very large tank or outdoor pond. Since both species are peaceful in nature, grow quite large and require ample space to swim, forage and explore, they will do much better if they are not crowded or overpopulated.

Are any fish compatible with goldfish?

Koi fish and goldfish are compatible under the right conditions. If you plan to keep them together in the same tank or pond, they should be the same size otherwise the smaller ones may get eaten!

Both koi and goldfish are docile in nature, but can become aggressive if kept in a very small tank or overpopulated pond. Also, they may eat each other’s eggs or offspring if they are not fed frequently or sufficiently.

Will koi fish and goldfish fight?

Koi and goldfish are less likely to fight – as both are known for their calm demeanor and easy-to-care nature. However, the level of aggression in koi fish will increase especially under stress. Poor water conditions, a crowded tank or pond, lack of food, and egg-laying behavior are all possible culprits of increased stress.

Also, avoid overpopulation of the tank or pond, make sure you are feeding your fish adequately and don’t keep more males than females if possible.

Are koi fish aggressive towards goldfish?

Koi fish are rarely aggressive towards goldfish, unless they are in a cramped aquarium or overpopulated pond. If the water parameters are ‘off’, the koi fish may be stressed. This, in turn, could increase tensions between tank mates.

Do they eat the same food?

Koi fish and goldfish generally eat the same type of food.  The carp species can eat anything. The general rule is that if it can fit in its mouth, it’s fair game! For this reason, you do not want to keep any species with smaller fish or eggs/offspring as they are likely to be eaten.

Do any fish eat goldfish eggs?

Koi fish will eat goldfish eggs – and their own eggs too, for that matter! Koi fish eat a variety of plant- and meat-based foods and are also omnivores. They will also eat other fish if they are small enough to fit in their mouth. Therefore, if you intend to raise koi fish, you should keep them in a large, heavily planted pond that will provide cover for eggs and hatchlings.

Do goldfish eat any fish eggs?

Goldfish, such as koi fish, are omnivores and will eat both plant- and meat-based foods, including other fish eggs. As opportunistic feeders, they forage continuously throughout the day and are on the lookout for food to eat. Their insatiable appetite and desire to eat anything that fits in their mouths (including other fish), make them a threat to newly hatched offspring.

Which fish are compatible with koi fish?

The best tank or pond mates for koi fish are undoubtedly goldfish. The best types include Comet, Orandus and Shubunkin. In addition, barbs, catfish, loaches, and plecos can also live in peace with koi fish. Make sure whatever fish you choose is of similar size and temperament, doesn’t require more care than a koi fish, and won’t compete with koi fish for food.

Which fish are compatible with goldfish?

The most favourable tank or pond mates for goldfish are often koi fish. However, since goldfish are docile and easy to maintain, other species of aquarium fish such as barbs, loaches, plecos, catfish will do well in the same aquatic environment.

If you have a koi pond that has goldfish and koi fish, you now have a very simple way to breed them. So yes, it is possible for koi and goldfish to lay eggs and breed together and they can produce some interesting babies.