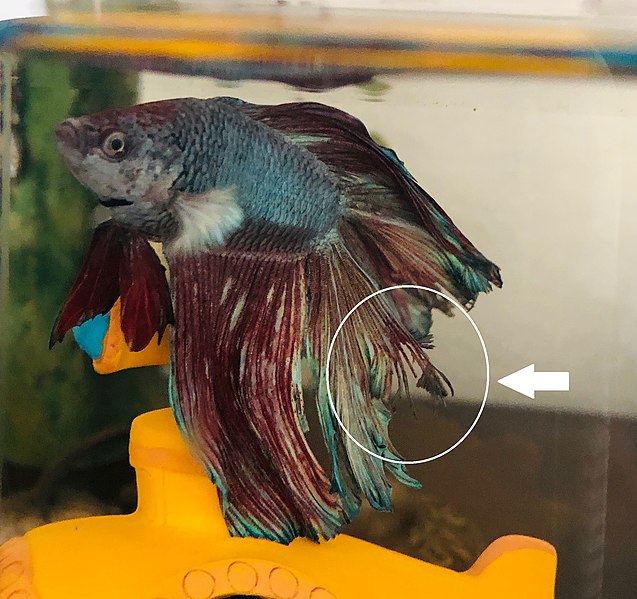 As a fan of the betta fish, I was a little disturbed to see its wings curled and clamped. My first assumption of the underlying cause was fin rot. However, as I did more research on the topic, I discovered that the reason for betta fish fins curling can come from a variety of causes and that the treatment varies accordingly.

Betta fish fins curling occurs more frequently due to aging and genetic defects. However, that can also be due to injury to the fins or poor water conditions, including pH, ammonia, nitrate and water hardness. These conditions along with diseases can also cause curled and clamped betta fins.

Your betta fish fins really say a lot about your betta fish health. Whenever you buy a betta, you are encouraged to get the one first with straight, flawless wings. That’s because curling is a symptom of a problem.

When the fins of a betta curls, some people immediately think that the fin rot is to blame. But this is not always the case. First, curled fins are often a symptom of a problem. They are not, in themselves, a problem.

Naturally, this is not always the case. However, it is important to understand that curled fins are a symptom of a problem your fish is currently undergoing and this forces you to look for the root cause of this problem. Betta fish fins curling have a number of potential causes, including:

Bettas have a lifespan of 2-4 years, with proper care can extend that number to 10 years. However, no matter how well you treat them, all the bettas eventually grow old. Another sign of aging is curling at the fins. Fray and twisting fins become one symptom of a growing old betta.

You cannot do anything to delay or undo this process. In addition, older betta displays other characteristics such as fading colors, sleepiness and white spots.

Curling in some bettas can also be as a result of some anomalies in their gene. Just lie the aging factor, you cannot fix the genetic anomaly in bettas. If your bettas are born with curled fins, the fry that they may end up produce will also have this curled fin abnormality.

If you suspect this is your fault, you should avoid breeding that particular betta fish. The next generation may have a similar problem. Also, you should avoid buying small bettas that were swimming with other curled bettas. This is very likely to improve symptoms in the future.

Bettas have an aggressive streak. They are highly territorial, especially the males. Thus, betta fish fins curling is nothing new. The fins are always the target of aggressive tank mates. When your betta’s fins are curled, there is no guarantee that they will return to how they were before, once they are healed.

However, some injuries will be resolved on their own. That is why treatment, in this case, is mainly by prevention. Make sure you eliminate all causes of injury. If your betta shares the same tank as the other fish, consider separating the two. You should also remove sharp objects and decorations in your tank.

The term ‘hardness’ refers to the mineral volume in water. Water hardness is directly related to pH. When water becomes hard, the level of dissolved minerals rises, and the pH (vice versa) rises.

All kinds of fish have a certain hardness that they can tolerate. For example, bettas grow well in water and weigh from 5 to 20 dH. If the water is too heavy, it can cause the fins of your bettas to bend. Fortunately, in that case, the problem can be reversed.

Many use water systems that use water softeners. Thus, water hardness is rarely a factor. However, if you encounter this problem in your aquarium, you can solve it by using sera super peat or other water softener prefer. If your water is very hard, there are cheaper solutions One good option would be API Aquarium Filtration Media.

It should be noted that the fins that curl due to the hardness of the water is not a cause for concern. Your betta is not in pain, and the main concern here is the aesthetics. That should be noted because water hardness is a tricky problem.

In an effort to fix it, you can dramatically change the pH, making the condition of your tank even worse. If you doubt your ability to change it without affecting the pH, you are better off leaving this problem alone. That happens especially if the curled fins in bettas do not bother do not bother you.

Water hardness is not the only source of concern where the betta fish tank is concerned. You should also pay attention to other parameters as well. For example, you need a temperature of 76 to 81 degrees F, a pH ranging from 6.5 to 7.5, and zero ammonia.

Nitrate concentration should be below 40 ppm, and nitrite levels should be zero. As hard as it is, bad pH can cause your betta fins to be curled. You can expect the same results from a tank with high levels of nitrate.

As noted, nitrites and ammonia are highly toxic to fishes. The curling of the fin is just one of the symptoms that will begin to appear when the concentration of these toxic rises. Eventually, your betta may get sick and die. One effective solution is to do weekly regular water changes of 10 – 15%.

With ammonia, a water cycle is also required. You should also remove any substances in the tank that contributes to elevated ammonia levels, such as residual fertilizer and dead plants.

You should check the boundaries of your tank to prevent conditions from deteriorating. Check the water weekly to make sure all the limits are within the correct range.

Keep an eye out for potential triggers. Stress can attract a variety of symptoms to your fish, including curled fins. You should also check out bettas from local stores. Many of them have deformed fins because they are kept in small containers which is one of the most common causes of stress.

If your betta tank is less than five liters, you probably need to upgrade. If the size of the tanks is not suspected, consider food. Make sure your bettas eat a lot of protein-rich foods. You should also keep large and aggressive fish away from them, not to mention adding plants that can provide shelter.

Fish can get bruises by contact with hard objects in the aquarium. Aquarists often decorate their tank with a variety of items. While swimming, if your fish brushes up against sharp edges of objects, it may lose its scale.

To avoid this, you need to make sure that your aquarium does not have sharp objects. More often than not, your fish will regain their balance, and you have nothing to worry about unless they are badly damaged.

When a betta fins curl, some people immediately think that the fin rot is to be blamed. But this does not always happen. First, curled fins are often a symptom of a problem. A lot of aquarists will tell you that their fish have curled fins, but they are happy and healthy.

Because of this, make sure you give the best environment and condition for your bettas to maintain their well-being and beautiful fins.