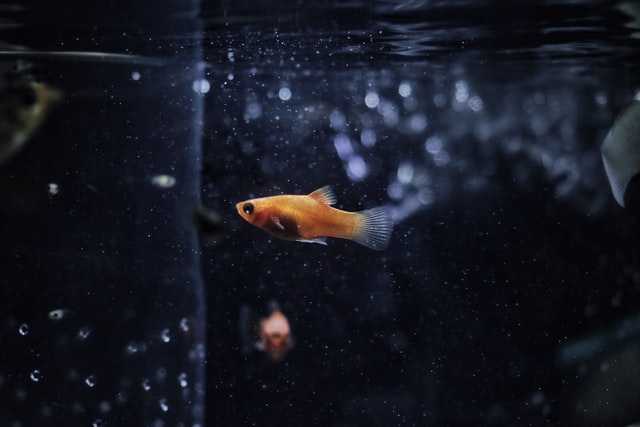 Platy fish are active, colorful and easy to care for. Platy fish is one of the best aquatics to be introduced in an aquarium by new aquarists. This is because this species of fish is ideal and suitable for a large aquarium. In this guide, you will learn more about their care needs when it comes to housing, tank mates, feeding and breeding.

The type of species of platy fish found in aquarium today are actually a hybrid of two closely related species:

The Southern Platy shares similarities with the Variable Platy because they are interbred in a way that makes it difficult to distinguish or identify one between the two species.

The lifespan of a platy fish

All species do not have a long life span, but could live for about three to five years if given proper care, although they are hardy by their species.

How big are the platies?

Platy fish are small peaceful species of fish. This species are usually very excited when in a small colony or group. More so, they are happy breeders, and are always active so much that they spend a lot of time swimming in little colonies. Aggression is not a thing for them although their males outperform females if you do not maintain proper proportions. This species of fish knows how to jump and should be kept in a covered lid.

How to cycle a fish tank

When your fish are constantly putting off waste into the water, all that waste begins to accumulate in the bottom of the tank and then decompose. As it does, it begins to release ammonia (NH3). Ammonia is very toxic, even in small amounts. It can build up in the tank until it makes the water so toxic and this can be harmful to the fish. When left alone, you can build and build a tank until the water is so toxic that you will kill any fish in the tank. That is where nitrogen cycle comes to play, a natural process that detoxifies the toxic ammonia, converting it from a highly toxic substance to a less harmful substance.

What is behind this transformation?

There are beneficial bacteria that live in filters and substrates that reduce ammonia. There are actually several bacteria in aquariums. One kind eats ammonia and puts of a substance called nitrite (NO 2 -1). Nitrite is also highly toxic but some other bacteria eat it quickly and convert it into nitrate (NO3-). Nitrate is less toxic and can be allowed to build up in the water amid weekly water changes. Substrate Platies do not have specific substrate requirements. They will swim to the bottom sometimes, but do not actually touch the substrate. So, gravel, sand, go with whatever you like. The fish actually won’t care.

Having plants in the tank mimics the environment in which these fish live in the wild. Platies love plants. The combination of planted areas and open swimming areas works very well.

They come from tropical waters, which tend to be on the hard side and have a slightly alkaline. Most livebearers prefer a high pH, ​​but platies can tolerate a much wider range from pH: 7.0 – 8.0 and they can live in a 10- to 20-gallon aquarium or larger.

Do platies require a heater? Most platies originate from Mexico and Central America, so they require temperatures between 70 ° and 80 ° F (21 ° -27 ° C). You will need to a heater in your tank to give them the temperature they need. When it comes to water parameters.

They can adapt to soft or hard water with proper acclimation. Tank Mates Plates are very peaceful small fish that can be safely combined with other small community fish. A group of three to six platies is a good start. The males are always wanting to mate want to mate, so try to keep at least two women to each male to give the females a break. This prevents women from getting tired from being chased.

Yes. While they may seem to enjoy the company of their own, they don’t tend to school together in a tight group unless they think you’re about to feed them.

What fish can live with the platy fish? These friendly little livebearers can be kept with any similar small sized fish such as, Cory catfish, mollies, snails, bristlenose plecos, rainbowfish, characins, Corydoras and other platy fish. Can plates live with betta fish? Most likely.

In our experience, betta fish usually live in a peaceful community tank with platies, just ensure to have they are kept in a larger tank with lots of plants and decorations so that the betta has enough space to call its own.

While choosing a colony of tank mates for these species, there are a few species that you should avoid, and they include the following: Tiger barbs, Wolf fish, Cichlids, Tetra, and Wolf fish. Do not introduce aggressive mates in the aquarium to be with platies.

In the wild, platy fish are omnivores. They will eat algae and plant as well as insects, larvae, fish eggs, fry and any other critter they may find. Be sure to provide them with basic foods made from high quality ingredients such as whole fish or shrimp, micro pellets, flakes, dried foods. It is always a good idea to give the fish a variety of foods to make sure they get all the nutrients they need. How often should platys be fed? Once a day is good for adults, while two to three small meals a day are preferred for the small fry. How long can platies go without food? In the wild, food is not always available, so they so not necessary eat every day. If you go on vacation for a week or less, your fish can easily survive without food. However, if you will be away for two weeks or more, consider getting an automatic fish feeder or getting someone to help take care of your fish.

How do the species of platy fishes breed?

The species of platy fish are usually identified as the live bearing fish, and they are known for having their eggs within its bodies till the species are due to birth their fry, that is usually larger, faster, and has a higher survival rate.

How do you know when a platy fish is pregnant?

The pregnant female platies can easily be spotted by their large abdomen and also a couple of black eyes on their skin. There are no different behavioral changes to look out for. Like other live bearing fish, it carries its fry until it is fully matured. The gestation period lasts about 28 days. Birthing process Platy Fry can swim as soon as it is born.

Under ideal conditions, female platies can give birth to 20 to 50 babies per month. Adult platies do not have a sense of protection towards their fry, they can actually eat them. This is why it is important to remove the fry from the aquarium as soon as possible. To achieve this, you should monitor the aquarium for at least two hours to identify if any fry has been born.

Make sure to look under the rocks, they are quite smaller (quarter-inch long or less) than the adult platies. After Care Adults do not show parental care for their children and may eat their own food, therefore, we recommend using a breeding tank of about 10-20 liters per filter.

Prepare a separate tank for the fry, let the water matches the conditions of the water in which they were born. Use a plastic scoop or net to gently remove the fry and place them in a separate tank. Keep them here until they are about the same size as their parents, and bring them back.

Species of platies are usually little fishes that are not necessarily open to illness or aquatic diseases specifically, they are quite strong although they are usually prone to fin rot and ich. More so, diseases of the fish are not very easy to identify, depending on the level in which it is spotted, and it may not be easily treated. The ich is a parasitic disease that leaves white spots all over the gills, fins, and the body of the fish. It is one of the most common diseases in the aquatic habitat, if left untreated, this often leads to damages and infections to the respiratory system of the fish.

However, a lot of treatments from raising the water temperature to the use of medications can be used to treat ich. In addition to that, it is always best to prevent the diseases from happening at all by ensuring that the quality of the water is good and that they feed right. More so, to promote a good environment, it is important to reduce the rate of stress that fish will undergo.

Species of the platies are usually very colourful as well as peaceful, which makes them ideal for many aquatic environments. You do not need a large tank or a large setup to store them. I think they are a good decision for beginners. They can be mixed with almost any other small, peaceful fish. A platy tank will never be boring.