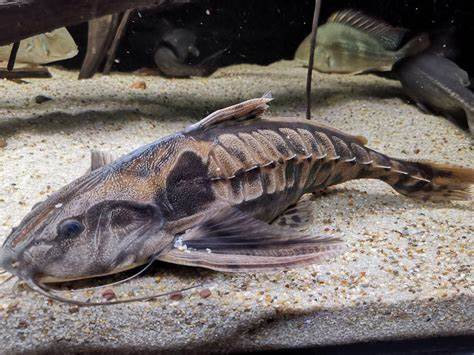 A unique and heavily armored catfish found in the Amazon also known as megalodorus uranoscopus is a specie of thorny catfish which is native to south America, The Irwini catfish is a gentle giant generally found in aquariums, easy -going with other tank mates. And this fish is a good scavenger as it will eat the leftovers at the bottom of the tank. These fish are also harvested for commercial purposes.

This heavy, characteristic bottom-dweller need an aquarium that is quite spacious, and has a substrate that is quite soft. Again, the width and length of an aquarium is very necessary and more significant even when compared to the height of the tank, hence more attention should be paid to its width and length, than to its height. More so, they grew quickly and require such attention.  Provide hiding places for them such as rock, PVC pices that are bore and wide, and caves as well.

This is because having enough hiding places makes it possible for these species of fishes to move around just as they want to, and when they want to, it also gives it some sort of comfort, that makes it swim around and retreat and the slightest sense of danger.

Also, providing it with a Dim light that is not too bright and, however if the light is too bright, then the tank can be decorated with a strong mother plant such as anubias or java fern, or tied to floating vegetation. A blue moonlight can be added to the tank especially before the major aquarium lights go off, so that you can enjoy viewing this catfish’s nocturnal movements when it is very calm.

The fishes could eat in a messy manner which usually provides nitrogenous wastes in excess, hence running a filtration that is very powerful round the aquarium is important with about two or more filters with canister so that there is always need for a backup. Constant change of water is important for the maintenance of the nitrate level. The aquarium should be designed in such a way that encourages brisk movement of the water, there can also be a good balance of retreat and for ample swimming. More so, the tank should have a heater, but the heater has to be safely installed so that they are not harmed or killed.

This species are also one of such species and can be trusted with fishes that are smaller, although there is need for the fishes to be up to twenty-five percent of the length of the fish. Some of this tank mates are barbs, metynnisand oscar. 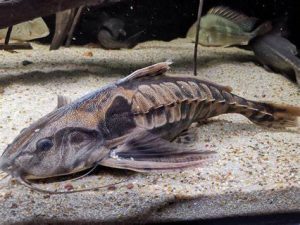 This fish has many bony plates and up to fifteen to about eighteen lateral scutes which increase alongside the caudal fin. Again, there is no plate above or below the caudal peduncle. This catfish has a speckled pattern in the ventral region, and they are dark with shades of brown in colour, with some markings that are black. More so, the pectoral fin is lighter in the base of the tank and around the end body. Then the adipose fin has a light colour with shades of brown on its base.

How fast do Irwini catfish grow?

This species is gregarious which means that an aquarium with base dimensions of 240 cm x 120 cm should be considered a minimum, but in reality, this species is only suitable for public aquaria and an extreme minority of private aquarists.

Very peaceful and can be combined with many other species in suitably sized systems. Potential tank mates include characids such as Metnis or Mylus spp., cichlids such as Cichla and Geophagus, large loricarids, other similar-sized doridids such as Pseudodorus niger, Potamotrygon or Osteoglossum spp.

This species proves to be best when maintained in a specific group and ideally groups of 4 or more should be purchased.

What do irwini catfish eat?

While in the natural habitat, the irwini cat fish feed on a variety of meals like the aquatic snails,, and in the aquarium they feed on mussels, prawns, food sticks, catfish pellet, and earthworms

How are they bred?

Well, there really are no cases where the species has been bred in an aquarium.