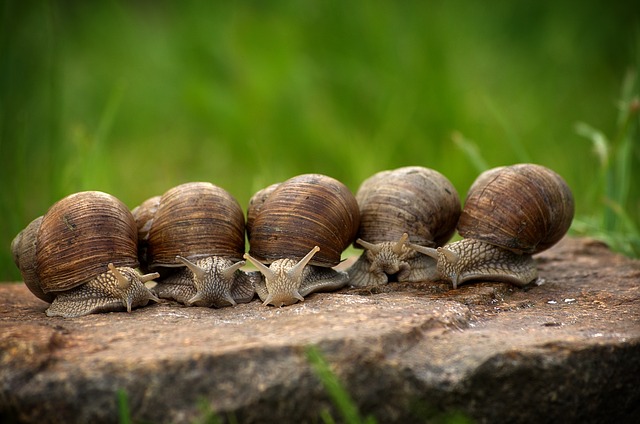 Q: Can snails outgrow or leave their shell? A: No. They can’t, the shell is always present from the onset of their development. It is always attached to the snail, grows with the snail in a spiral shape.

If you’ve seen a snail without a shell, you’re looking at the snail’s cousin, the slug, which usually doesn’t have a shell.  The empty shells you see lying around are those of snails that are dead.

Snails don’t outgrow their shell! They don’t even move into new ones. If they fall out of the shell, they are bound to die soon. Calcium intake is efficient for maintaining the health of the snail as well as the strength of the snail’s shell. There about forty-three thousands of the species of snails like the freshwater snails, the land seas and the sea snails.

Why do snails come out of their shell?

Species of snails leave their shells in search for food. The snail’s tentacles contain the neurons from the olfactory which gives it a sense of taste and smell with which it finds food. They also use this olfactory neurons to see the slime marks of other snails on the pathway, this usually leads them to a place of safety and a place they can find food.

Snails intercouse can last for several hours, most snails are bisexual, meaning that they are hermaphrodites and so have the female and male reproductive organs all in one snail. More so, before they mate, they ensure to be covered in mucus, after which the snails fertilize each other there by being reproductive. There are species of the hermaphrodites that are able to fertilize itself without the assistance of any partner.

A snail can lay one hundred eggs. it all depends on the species of the snail. The eggs are usually small in size and so should be kept in moist and warm environment that is not prone to danger. After the snail has laid its egg in a moisty place, it takes about weeks for the eggs to hatch the newborns.

During an attack by a predator, its best defense is falling back to the shell. Unfortunately, some of its predators have the ability to break the shells which makes the snail defenseless when broken. The best chance for a snail to survive is to settle in protected areas by reducing the time it spends outside the shell.

Then, do snails die when their shell is broken?

Like the nails of our own fingers, the shell of a snail is part of its body. If this shell is brokenenough the snail will die.

Can snails repair their broken shell?

Many of us have heard of snail shell disease when we accidentally crush them while walking or cleaning a garden shed. If you have you must have wondered if this is the end s for your unlucky garden friend. The answer is yes. But the repair to their shells depends on the extent of their damage.

Snails are born with their own shell but at first, the shell is soft and deformed. This soft initial shell soon hardens and grows with the snail in its adult life.

As the snail grows, it produces more soft-shell material that hardens to further develop its defensive shell.

If this shell breaks off enough, the snail will probably die. Although, snails can repair little cracks on their shells but if it is a large crack they might struggle to survive as their shell is responsible for their protection and also prevent them from drying out.

It has sometimes been known to use plaster and even ordinary adhesive tape to hold small broken shells together allowing the snails to fill in and seal the cracks.

How long do snails live in their shell?

Snail undergo a process known as estivation, they can hibernate for up to 3 years. They will stay inside their shells until food becomes more available or the weather is safe for them to come back out.

Can snails change their shell?

Invertebrates like the hermit crabs change their shells when the shells get big, but the snails do not have such ability to change shells or neither do they outgrow the shells they have.

However the snails are able to develop and also take care of their shells by themselves that they will lose valuable protection if they change the shell. They cannot repair or even maintain a new shell.

Can snails survive without a shell?

Species of snails need shells to survive, and these shells provide them protection from the conditions of their environment and from their predators.

It will feel little or no pain if you step on it. If you only crush its shell it will feel a fair amount of pain, especially if it breaks and gets stuck in the snail.

There are empty snail shells when the snail has be eaten or rotten after its death because the various species of snails all have fleshy bodies that can rot even though its shell.

If you came by a little place that has a big number of snail shells that are empty, chances are that a strong predator has taken these snails to its own nest and must have feasted on them, which is the shells are dropped around such surroundings.

How old can snail be?

This is basically because as the snails grow in age, there is a visible growth of the rings that can be counted on the edge of the snail’s shell. Snails that are between six to nine years have shells that are quite thick, and usually lay outside.

What does the snail usually cling to?

Snails can stick to any hard surface. If the snail lingers on something longer, it can attach itself to anything by the dry skin of mucus lining to the surface of the shell’s mouth. Again, it doesn’t need to keep its body in contact with the surface at all.

How long does a snail live?

Some of them only live up to five years. However, others can live up to 25 years in captivity and this depends on their species and habitat.

How long can snails live without food?

But according to your query, snails can survive for a week without food.

Do snails have shells from birth?

Yes, they do. The only thing is that the snails at birth have shells that are transparent and soft, as they grow the shell hardens

Although there are chances that snails originate from the same place as the slugs, they are not the same species and a slug cannot be a snail.

Where then are snails from?

Snails are birthed with shells, and they require diets that are rich in calcium to stay healthy, they feed on the egg from which they were hatched because the shell contains essential nutrients that help the snail build its hard shell.