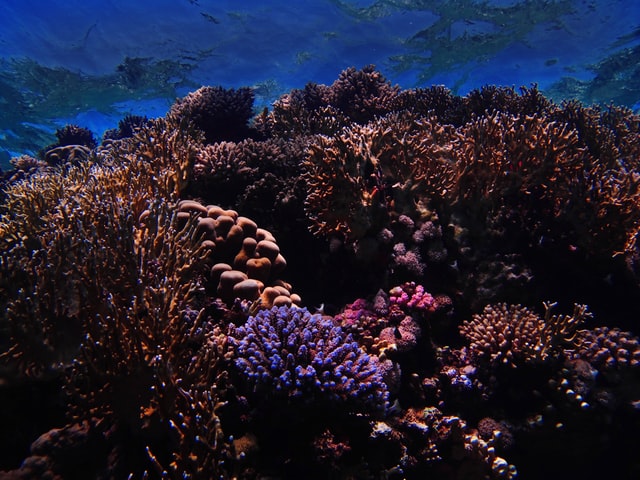 Yes, corals, which look like rock or plant, are actually animals. There are different types of coral which come in a completely amazing mix of colors, shapes and sizes. As a matter of fact, the coral reefs have proven to be made by a mutual relationship between the algae and the corals that exist in its tissues and as well provide the animals with what is needed for photosynthesis, and the beautiful colours.

The colours of the coral ranges from red, blue, green, yellow, brown, pink, or purple as the case may be, however the definite colour depends on the particular combination of the zooxanthellae algae that is present within its tissues as a few corals are known to be fluorescent the colours are amazing and are patterned because of its great concentration of algae within its coral mountains, there are millions of the same algae as per square centimeter of coral.

They are invertebrate coral reefs that belong to the class of Anthozoa, class of Cnidaria. They are commonly found in the common colony of the same polyps.

Coral species are also rock builders that live in the tropical oceans and then secrets the carbonates of calcium to build a rigid skeleton.

While various corals exist, they are identified in different categories. For instance, there is the soft coral and the deep coral. Again these species of corals are different even in its own structure and the environment.

There are more than two thousand different species of corals that make up various colonies which also plays major roles in the water area.

The hard corals are made up of strong calcium (limestone) and appear more like rocks. Each polyp secretes exoskeleton made of calcium carbonate and an internal skeletal structure that stays in place even after death.

As each generation of polyps dies and their exoskeletons remain, the corals grows larger and because each polyp is very small, the strong corals grow at a very small rate. Strong corals are scientifically known as scleractinians. 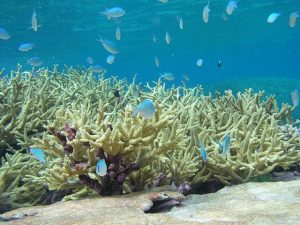 Staghorn coral (Acropora cervicornis) is one of the most important species of natural coral reefs. These hard corals are very fast growing species, and apart from that they also create a safe haven or home for many marine mammals.

Staghorn corals are identified by their sharp, carved branches that make coral gardens that are dense to be found in waters that are shallow. More so, this often appears to be a strong threat to the coral reefs of Staghorn. 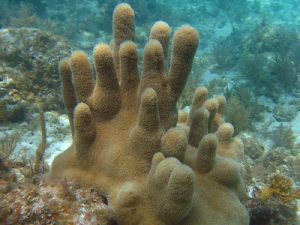 “Pillar Coral” by FWC Research is licensed under CC BY-NC-ND 2.0

Pillar corals grows from the sea, but without a second branch. They can grow up to 2.5 meters (8ft) in height. They can grow on both flat and loose sea levels to a depth of between 1 and 20 m (65ft). It is one of the few species of hard corals whose polyps seem to be common during the day. 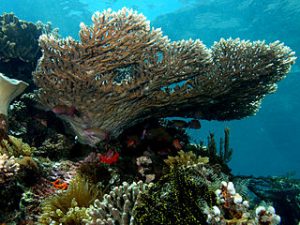 This type of coral is a similar branch of coral with the Staghorn coral, but grows like flat plates. Characterized by a lot of branches that are intertwined and by a stem rising with branches that spread out horizontally to make a structure that looks like a table.

The coral shape of the table is ready to reveal their size as much as possible in the sun. The typical color of the coral table is brown or green, but it is illuminated by the many coral reefs that live under their plates. 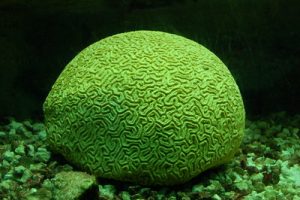 “Brain coral” by bob.bachand is licensed under CC BY-NC-ND 2.0

Named because of this condition of the coral spheroid and the grooved surface resembling the brain of an animal. Colonies can grow up to 1.8 meters or more. 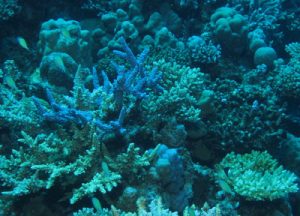 Blue corals are named after their distinctive, permanent blue skeleton, usually covered with green or blue polyps. These types of coral are found in hot water, in flat-bottomed flats, and on high-slope corals. 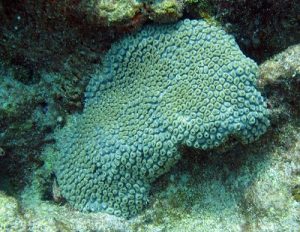 The great star coral is a colonial type of coral, it is the colony of colonial rocks found in the Caribbean. It forms large boulders and sometimes plates. They are Polyps the size of a human thumb and can be seen fully expanded at night. 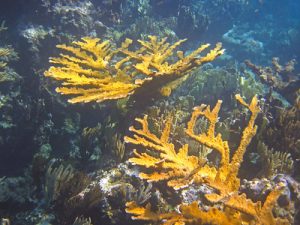 As the name suggests, these types of coral look like horns of deer or elk. This type of coral is mostly taken to be one of the major reefs of corals in Caribbean.

More so, this kind coral is difficult especially with its formation of various big branches. Popular options such as home lobster, snappers, parrot-fish, and other types of marine fishes. The elkhorn coral colonies usually grow quite fast and grows at an average of five to ten inches.

Soft corals are generally similar to trees and plants. The soft corals are quite flexible and soft that they are void of stone structures such as hard corals.  They are called Ahermatypes, and the examples of the soft corals are sea whips or the sea fingers, and they are commonly found in the Caribbean and the Bahamas.

More so, corals like this do not really have any relationship with the zooxanthellae. This gives the soft coral some protection and support. The species is soft and prefers to live in rich, nutritious water with very little light. 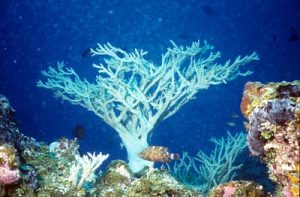 “Tree coral with Wrasse in Fiji” by Derek Keats is licensed under CC BY 2.0

These delicate flowering corals are abundant on many sea-shores they are mostly attached to surfaces that are solidified like the coral rubble, jetty pilings and the rocks. More so, the thick ‘big stem’ sticks to the solid surface on one side, there are many small branches on the other side which is why it is called Tree Coral. 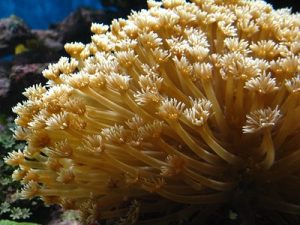 “pipe organ coral” by wlchui is licensed under CC BY-NC-SA 2.0

Although this type of coral is considered to be soft coral, it has strong bones that hold each soft tube. All of those tubes usually have heads of tentacles that are feathered, and are fed on by the plankton. They are mostly seen in waters that are shallow and they prefer areas that are protected. 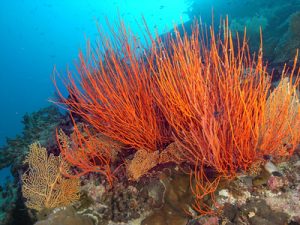 The sea whip coral is also part of the gorgonia coral family.

Branches like the corals of the sea whip find colours like orange, yellow, purple and red attractive. More so, these reefs are mostly seen in waters that are deep, they live in walls, and on rocks that are growing up to about three feet. 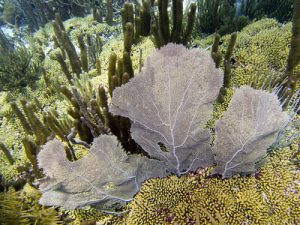 “Sea Fan” by Peter Nijenhuis is licensed under CC BY-NC-ND 2.0

Venus Sea Fan is a fragile species of corals. Found mainly within the West Indies and the Bahamas, the Venus sea fan coral is also a soft coral that is beautiful and belongs to a chain of various branchlets that usually grow in bases that are small.

They have various colours like the lavender, yellow, and the white colours, the favourite place of the Venus sea fan coral is the shallow part of the water that has strong waves of about thirty feet. 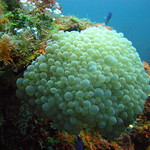 The Plerogyra sinousa or the bubble coral is also a major species of the corals, and is commonly found within three to thirty-five meters in depth, and can also be taken to be the eggs of fish.

While in the day, these skinned or white polyps are like clusters or blisters of grapes and at night, the small balloons loosen, and allow its cords access to hunt for food. The bubble corals are usually found within the the reefs of corals like the Indian ocean and the Red sea which is at the center of the pacaific. 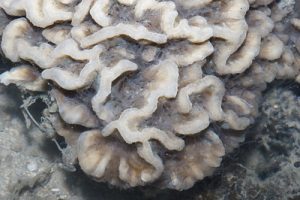 This type of coral has a variety of colours that are very vibrant, and survive beneath caves and underhangs. They are usually found within the Indo-Pacific-Islands like the Tonga, Fiji, Great barrier reef, and the Solomon island

Carnation coral thrives in high-energy areas, and it usually grows on walls or under rocks. In the presence of an active current, this type of coral blooms and multiplies to feed, and in the absence of current, they sink to the bottom. 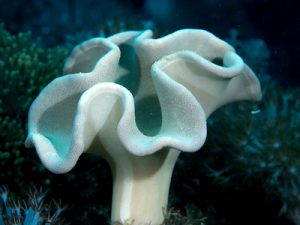 “Toadstool coral (Sarcophyton sp.)” by krokodiver is licensed under CC BY 2.0

Also known by other names such as the Trough coral, the Mushroom Coral, and The Leather Coral. This type of coral has a variety of the brown shades with particles of gold or white. It is also not easy to find the various species because they all have similar toadstool or mushroom appearance, and each also has various capitulum and stem. They take a curvey appearance as they progress in growth. 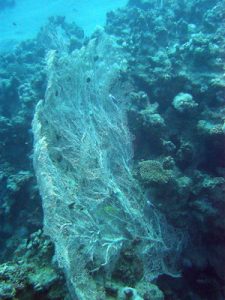 The gorgonia is also a family of the soft corals that are called sea whips or sea fans. Some may be like a whip. The gorgonia has a colony that can be few inches in its diameter, thick and a lot meters high. Sometimes they are usually yellow, or red, or purple. They are mainly in the shallow water while some are in depths of many thousand feet.

Fan shaped gorgons prefer to live in shallow places that have currents that are quite strong, then the thinner, taller, and the stronger gorgonians often like to stay in calm but deep waters. 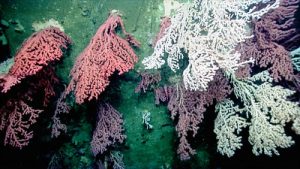 “Deep-Sea Coral” by Green Fire Productions is licensed under CC BY 2.0

This types of corals are mostly seen in the depths of about six thousand meters or about (twenty thousand feet) below sea level.  This type of coral lives in cold, shallow waters with little sun. They are very shallow species, and they exist as multiple polyps or single polyps and live in colonies that are complex, and are made up of various species.

They have no need of warm water or sunlight, so they thrive within many waters around the world. They have even been found in cold water to be about one degree Celsius, they do not live under the sun and so have zooxanthellae which implies that they obtain nutrients and energy from other sources

The main reason many scientists did not know that there are these deep coral reefs is as a result of the long lasting lack of access to the sea depth. However these corals are one of the oldest marine to have lived.

Corals are sexually productive organisms, they reproduce asexually and sexually because they are either hermaphroditic or gonochoristic. Breeding helps them adjust to new habitats, as their process of reproduction deals with chemical interactions.

This corals feed on a lot of micro-organism, ranging from the little zooplankton to the species of small fishes, they catch and kill through the nematocysts cells in their tentacles, these bear poisons that are mostly dispersed as a reaction to contact with another being. The perculum opens and the tentacles that sting turns the barb fish to a prey by stinging, then venom immobilizes the prey by the injection of a filament that is lose, the tentacles drift the prey to its stomach, and ones digested, it opens its stomach opens and allows for the removal of wastes and the beginning of a new cycle of hunting.

Do the corals have any predators?

Like most living organisms, the corals have a lot of predators, like the turtles and parrots that eat coral reefs as part of their daily routine. More so, the starfish is the only carnivorous animal that can devour a reef. Hence, when there is an infestation or outbreak of the starfish on the reefs, the situation may not be salvaged and the reefs are totally destroyed within a few months.