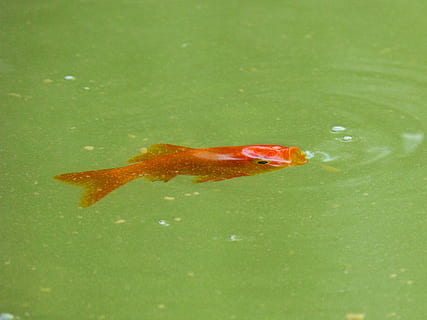 As a fish owner, I have been growing goldfish for years. Over time, I learned to identify signs that indicate something had gone wrong. An example would be a goldfish that is constantly blowing bubbles. To make sure that the situation in your tank will be resolved, I decided to point out all possible causes and solutions for the incident.

Goldfish can blow bubbles due to a number of many reasons, can be due to high nitrate levels, respiratory disease, or high ammonia levels. However, goldfish can also produce bubbles as they empty their swim bladders.

As we move forward in this article, I’ll share with you causes as why your gold fish might be blowing bubbles and necessary steps to prevent this.

Why does my goldfish blow bubbles up?

Goldfish are not like bettas and do not have a reputation for building bubble nests for mating and breeding purposes. As such, if you see your goldfish blowing bubbles, you may need to identify possible causes.

Fish need oxygen in their water to survive. However, high concentrations of oxygen are harmful and can suffocate your goldfish. Supersaturated gases introduced into a tank via pressurized tap water can accumulate under the skin, making the fish look as if it has a tumor.

The severity of the disease depends on how much oxygen is dissolved, and the organs involved. More factors that contribute to that disease in aquariums include a leak in the air pump or valve system.

The swim bladder is so important that, when its functions are compromised by injury or disease, fish lose their ability to swim properly. For example, it can force the creature to lie on the bottom of the tank.

Bubbles can sometimes play a role in the operation of the swim bladder. i.e; A goldfish can rise by allowing gases to fill the swim bladder. This allows the fish to swim to the top without expending any energy at a minimum.

The reverse is also true. Allowing gases to exit the swim bladder can quickly sink your goldfish. When this happens, the goldfish become heavy and are forced to move to the bottom. Fish release air by burping, which causes bubbles to form.

If your goldfish has reason to swim to the bottom, you will naturally see more bubbles coming out. For example, if the top or middle section has aggressive tank mates, your goldfish will seek safer spots in the tank.

Some fish continue to eat bubbles from time to time. They practically nibble at them. If they swallow air because of this, they may eventually expel it as bubbles through the mouth or gills. Those fish naturally do this at the top as bubbles rise to the surface. When the air is not expelled out, it can lead to gas bubble disease which can cause swimming problems or worse death.

This is where the supersaturated gases are absorbed into the fish, clustering under the tissue and causing swimming problems, possibly even death.

Is your tank too hot? This is a reasonable question because the warmer the temperature, the less oxygen it can hold. If you have allowed your aquarium temperature to rise, your fish will rush to the surface to escape the low oxygen levels at the bottom.

They also gasp for air, resulting in bubbles. This is very likely to happen in tanks adjacent to a window. The temperature also rises in relatively small tanks, and especially in bowls.

Blowing bubbles in fish isn’t always innocent. Most cases fish that blow bubbles at the top of the tank are gasping for air. In other words, the oxygen level at the bottom of the tank is so low that the fish is struggling to breathe, which is why it rests on the surface where the oxygen level is so high.

If a fish is struggling to breathe, it will become more active, swimming faster before eventually becoming lethargic, especially in situations where hypoxia persists.

Most fish are intelligent enough to live below the surface of the water, only extending their mouths far enough apart to consume the thin layer of oxygenated water that is directly touching the air.

Air pumps produce bubbles. Goldfish are attracted to these bubbles, and if you watch the fish carefully, you will see them nibbling on small pockets of air. Sometimes goldfish swallow air in these bubbles as well.

This air is eventually pushed out of the goldfish’s body through the mouth or gills as best-case bubbles. In the worst case, the air eventually compromises the operation of the swim bladder.

Either way, if you have multiple air pumps or air stones in your aquarium, the source of the bubbles may be in your equipment. You must have seen goldfish spitting those, but this is only because the fish had stored it in its body.

This means that the water quality in your aquarium has deteriorated significantly. If the water comes from a tap, you should do a test to determine the amount of chlorine and chloramines in the tank.

These substances are toxic to fish. Some aquarists believe they can draw chlorine out of water. they are right; However, this does not apply to chloramines. Goldfish living in tanks with toxins will come to the surface in search of escape.

If it is not due to chlorine, then it might be ammonia.

Ammonia will slowly burn your goldfish’s gills, affecting its ability to breathe. The bubbles you see indicate that the fish is gasping for air and is in shortness of breath.

Ammonia is common in small, overstocked tanks. Goldfish are very active and messy creatures. Therefore, if you keep too many of them in a tank that is too small, the ammonia concentration will increase, putting their lives at risk. If ammonia isn’t the problem, your tank simply lacks oxygen. This can result from overstocking, overcrowding and high temperatures.

Your goldfish will run to the top where they will produce bubbles gasping for air because the water at the top contains more oxygen than the water at the bottom. You are likely to see that kind of behavior in other fish in your tank as well.

How to treat a goldfish that constantly blow bubbles?

If your goldfish occasionally blows bubbles, you don’t have to worry about its behavior. Still, if bubbles have become a consistent phenomenon, you can use the following steps to fight them:

If water quality is to blame for the bubbles, you should take steps to improve the conditions in your fish tank. This means making sure your goldfish’s pH is between 7.0 and 8.4 and that the temperature is between 60- and 74-degrees Fahrenheit.

If you notice that the pH is less than 7.0 (after using a test kit), you should do more frequent water changes. Start by changing the water at 15-20% every week. Try to make changes gradually as sudden fluctuations in pH can do more harm than good.

However, if your goldfish is just blowing bubbles to the surface, you don’t need to wait a week. You can start doing the water changes immediately.

Also, the tank size should be at least 20 gallons to prevent overcrowding. I also suggest eliminating some plants and decorations, so your goldfish can swim more freely.

If your water comes from the tap, I suggest using a dechlorinator. Dechlorinators are not that hard to find and are relatively cheap.

The same goes for products that actively remove chloramines. You can save some time by filtering tap water with high-quality carbon before adding it into the tank.

If ammonia is to blame for the bubbling, your only option is to do a water change. There is no way to prevent ammonia from accumulating because fish naturally remove it through their urine and gills. Nevertheless, the mission of the aquarist is to control the accumulation rate.

You can prevent ammonia from becoming a problem in the future by adding a more powerful filter. But it will help if you remember to clean the elements of your current filter. It won’t do you any good if the parts wear off.

I also recommend eliminating organic contaminants in the water, such as leftovers, waste in the substrate, and dead plants and animals that produce ammonia when they decompose. You can achieve this by vacuuming your substrate after you have cleaned your aquarium.

A powerful filter can create the movement needed to increase the diffusion of oxygen in a tank lacking oxygen. However, a more practical option involves adding an air pump, air stone and bubbler.

It would be best if you also consider adding natural plants to your goldfish’s aquatic environment. They consume carbon dioxide while producing oxygen. However, you should keep in mind that the process reverses over the course of the day. Therefore, try to minimize light exposure.

Maintaining the correct temperature in the aquarium is not so difficult, not when you have a functional heater. Some heaters go bad without the aquarist’s knowledge. Due to which they have to heat the water more.

If your tank temperature is too high, you should start by inspecting the heater to make sure it is working properly.

You should also keep the tank away from direct sunlight coming from the air conditioner and open windows. If the ambient temperature keeps raising the tank temperature, you can lower it by using a fan to blow across the surface of the water. It would help if you also consider removing the aquarium lights.

If your fish is blowing bubbles due to supersaturated gases, you can solve the problem by stirring the water. By creating the movement, you will be able to release the trapped gas that was dissolved in the water.

Do this before adding water to the aquarium, especially if you poured the water into the container from a relatively high-water source. You can achieve similar results using an air pump, but make sure the process is done outside of your fish tank.

As was mentioned above, aggressive mates can drive your goldfish to the bottom of the tank. In order to sink correctly though, your goldfish will have to expel air from its swim bladder, creating bubbles in the process.

This is the proper function of the swim bladder. Still, those bubbles indicate that your goldfish is fed up and possibly in distress. To solve this, I suggest taking out aggressive tankmates who constantly chase your goldfish.

Those mates differ in each tank. Your best option would be to inspect the tank and determine if certain fish are threatening your goldfish. Try to see if the chase is going on or your goldfish has some nipped fins. If so, take out the problematic fish.

If your goldfish is blowing bubbles, this may be a way to oxygenate its gills. Although, if your fish does this frequently and consistently then this should get your attention.

Begin by testing your elemental water elements, including chlorine, ammonia, nitrates, nitrites, and pH. You can do this by getting some test strips. If the water is unsuitable for the fish, you should do more frequent water changes.

This is especially true if the pH is below 7.0, or if the ammonia level is relatively high.